Here is one of 2013's first utterly essential films.

James McAvoy plays Simon, a fine art auctioneer who joins forces with a criminal gang to swipe a work of art which is worth millions. But, during the heist, he gets a bump to the head which causes him to forget where the picture is.

Enter criminal gang leader Franck (played with calm menace by Vincent Cassel). When intimidation and violence fails, they turn to hypnotherapist Elizabeth (Rosario Dawson) to help unlock the secret of where the picture is. She's an expert at putting people in trances and getting them to delve into their subconscious to get the answers they need.

But, as she begins to work with Simon to get the criminals what they want, the stakes become much higher and the lines between reality and what's in Simon's head begin to blur.

Trance is a visceral and intellectual thrill as reality blurs in and out at dizzying speed. You really will need to keep up with every little moment as it plays out. 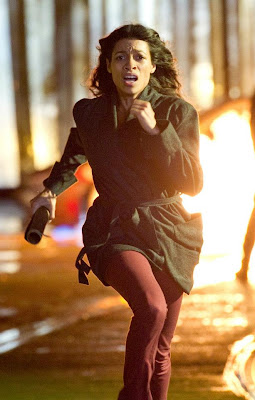 Confounding expectations and defying genres, it's an initially heady art heist thriller which switches tracks as it unfolds. With intrigue, mystery and a fairly high quotient of WTF and twists and turns, Trance is a real treat as it spools out on the screen, replete with dazzling brilliance from all involved.

Director Danny Boyle's also bought in a hell of a lot of visual originality to the screen for the day after tomorrow look and feel of the film. By giving the capital a neon glow (one of his best shots sees a section of motorway viewed from above and bathed in orange), he's made it look realistically futuristic but still grounded in the world today. Jumping back and forth into different worlds, Boyle's effectively ensured that you'll be on the edge of your seat, trying to work out what the main thrust of the narrative is.

With Trance, there's the thrill of seeing it unfold without knowing exactly what's going on - and then the film commands a repeat performance to take it all in after the enigma has been revealed. With a pulsing soundtrack which masterfully builds the action, it's a perfect blend of mystery, intrigue and compelling performances. Throw in a story (which bears some resemblance to a UK teleplay of the same name) which rewards intellectual smarts and cinematic attention, this is, in so many ways Danny Boyle's Inception. Trust me - you'd be best to see it with little fore-knowledge of what lies ahead.

Exciting, enthralling and utterly engrossing as well as rewarding, Trance is one of 2013's first great cinematic experiences. In fact, you could send it's a Trance-ending mind-bending treat not to be missed.