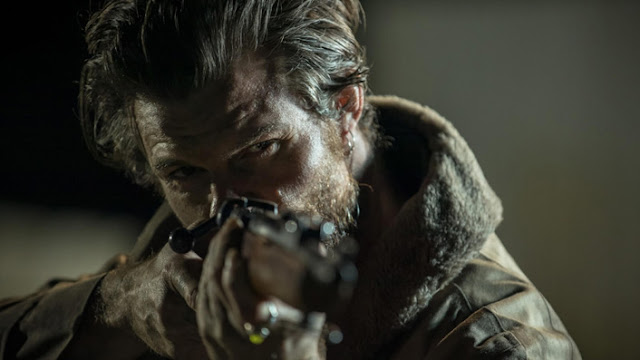 Based on Owen Marshall's short story, Coming Home In The Dark is the story of a camping holiday gone awry. Erik Thomson and Miriama McDowell's Hoaggie and Jill are in the beautiful NZ  countryside with their two sons when Daniel Gillies' Mandrake and hooded silent sidekick Tubs (Luafutu, a considerable presence of menace with nary a word spoken) stumble into view.
Interrupting Jill and Hoaggie's picnic, there's an immediate air of danger - something only exacerbated when Mandrake produces a gun....
To say more about Coming Home In The Dark's story is to rob it of the inherent tension which Ashcroft has engineered out of a threadbare story - and stretched about as far as it can go over its 90 minutes run time.
In fact, even the film's synopsis ruins the finer points of the mystery that plays out from a seemingly random encounter that ultimately turns deadly. 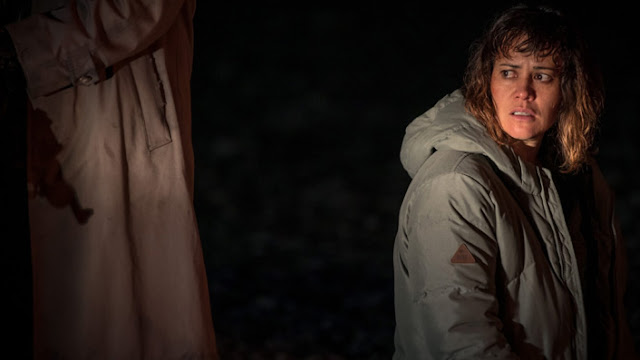 There's little character development over the 90 minutes, other than a performance from Thomson which gradually degrades as the story plays out. But that's not really the point here, as the film tackles New Zealand's shameful past in a way that's challenging, claustrophobic and nerve-shredding, with punctuated moments of calculated and viscerally shocking violence.
In the centre of it all, is a charismatic Daniel Gillies. Here he flits between sardonically dry humour and outright menace at the flick of a switch; it's an utterly compelling performance that commits to the film's sense of unflinching unease and outright shocking nature.
What Ashcroft's achieved on a condensed shoot is something that's brooding and haunting - with brutality rather than the beauty of New Zealand at its core. The film may become with the majesty of the New Zealand countryside thanks to Matt Henley's cinematography, but as much as night follows day, the movie dips and leans into a darker more upsetting aesthetic, punctuated with a crunchingly horrific soundscape as tt transitions into the night and as the road trip plays on. 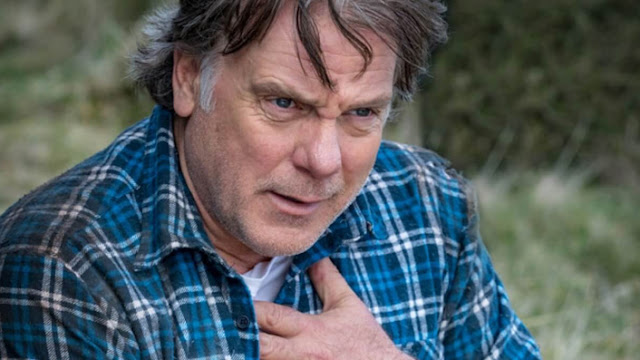 It's a sobering, chilling watch that won't be for all - and there's an occasional feeling that a stop-start nature of the screenplay pierces the tension, but all in all, as Coming Home In The Dark plays out, it's unforgettable. An unflinching descent into the sins of the past and of the country as a whole, it's a film that stays with you a long time after the lights have gone up.
By Darren - August 11, 2021

Email ThisBlogThis!Share to TwitterShare to FacebookShare to Pinterest
Labels: Coming Home In The Dark: Film Review

Spiral: Blu Ray Review How do you revitalise a franchise like Saw, which had become so reliant on everyone knowing everything about Jigsaw a... 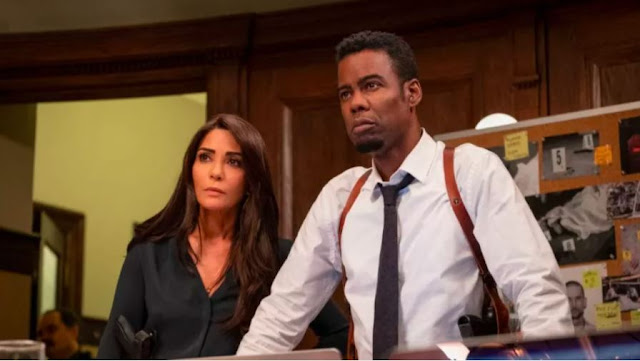