When the PlayStation 4 launched last year, there was little on hand in the way of next-gen launch titles with Watch_Dogs and Drive Club being put back on the release slate. It meant that there was really only Knack and Killzone: Shadow Fall on hand to set it all off with other titles being upgraded from prior releases. 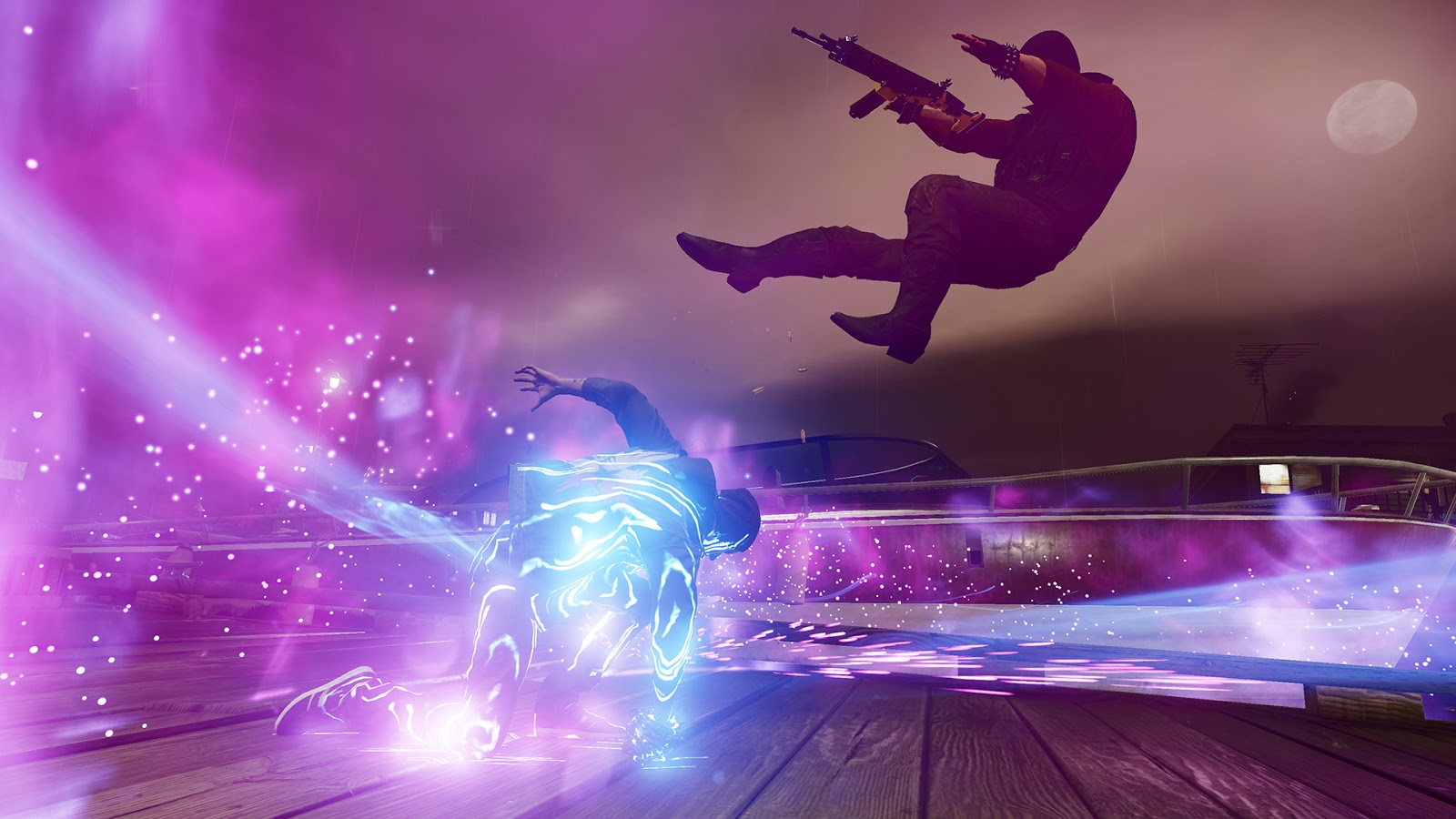 So, it's now up to the March release of Infamous: Second Son to quell some of the naysayers who were unhappy with the launch slate.

And based on the demo that I played this week at PlayStation HQ, they will be asking to have their opinions heated up and served to them on a plate.

Infamous: Second Son is a stand alone title with little links currently evident to the original protagonist, Cole, from the Infamous series. Those games were more than enjoyable with moral decisions serving to propel the gameplay along - but it also gave you a chance to take the high moral ground or kick some ass (and ensured a second playthrough as well).

This latest lives in the same world, but offers a new entry point to those who've not played the game before. (But promises nods to the worlds previously played, if you're so inclined) 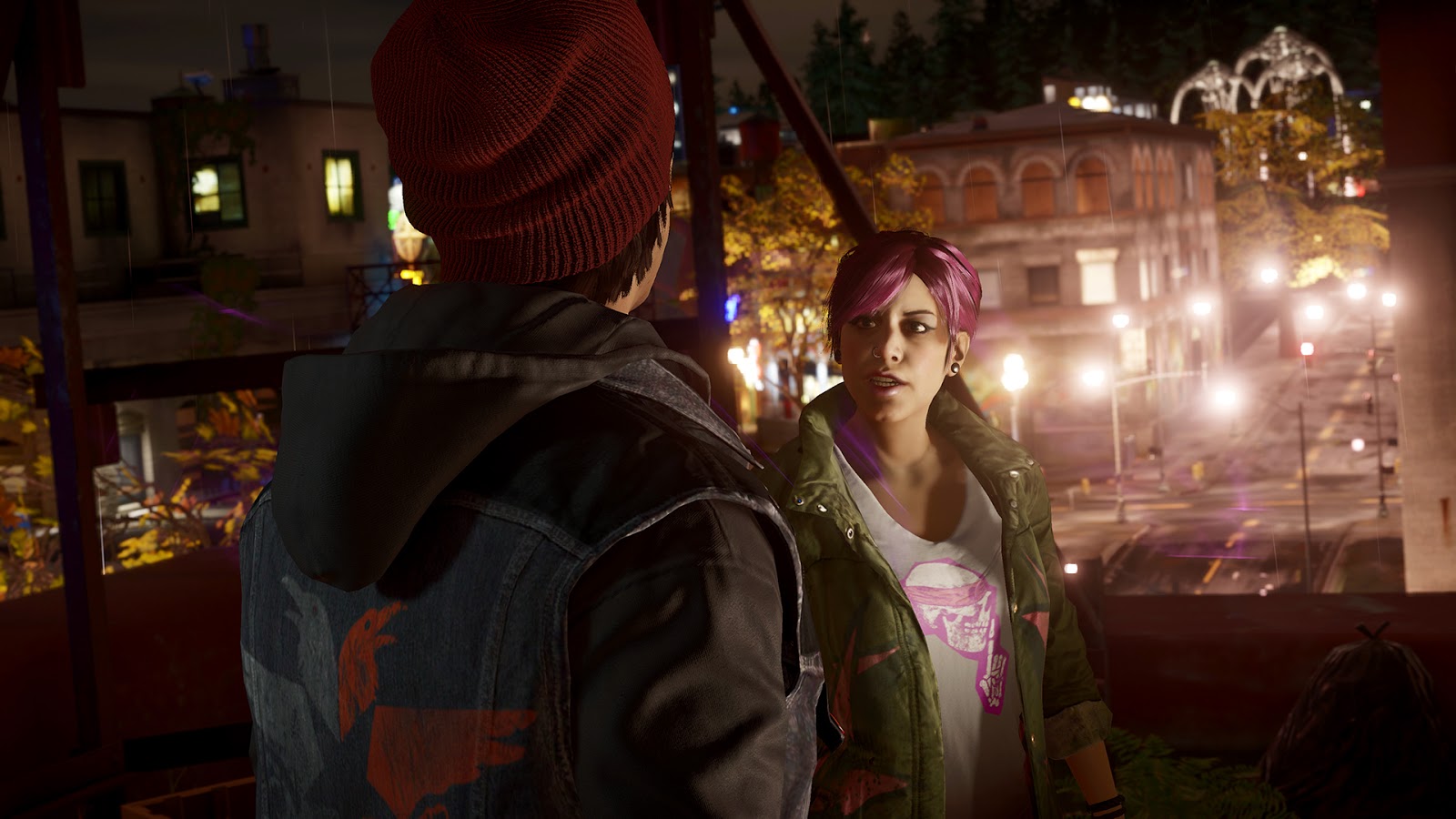 You play as Delsin Rowe (voiced by the ever brilliant Troy Baker), a kind of street punk, graffiti artist. Given conduit abilities after an accident, Delsin's discovering his new powers in Seattle - and facing conflict from his brother, a cop called Reggie, who's trying to keep him on the right side of the path.

As the demo begins, Delsin and Reggie have discovered another Conduit named Fetch, a pink haired, nose ringed punk girl and are debating whether to save her or leave her locked up. This is the first of the moral decisions faced by Delsin and by taking the path to Redeem Fetch first up, you're plunged into a dockside mission to rid the area of drug dealers.

It's the first interesting connection that Infamous: Second Son rolls out - as the choice you make changes the narrative and the cut scenes as well - but whether mixing up good and bad changes the story path through out, we've yet to see. 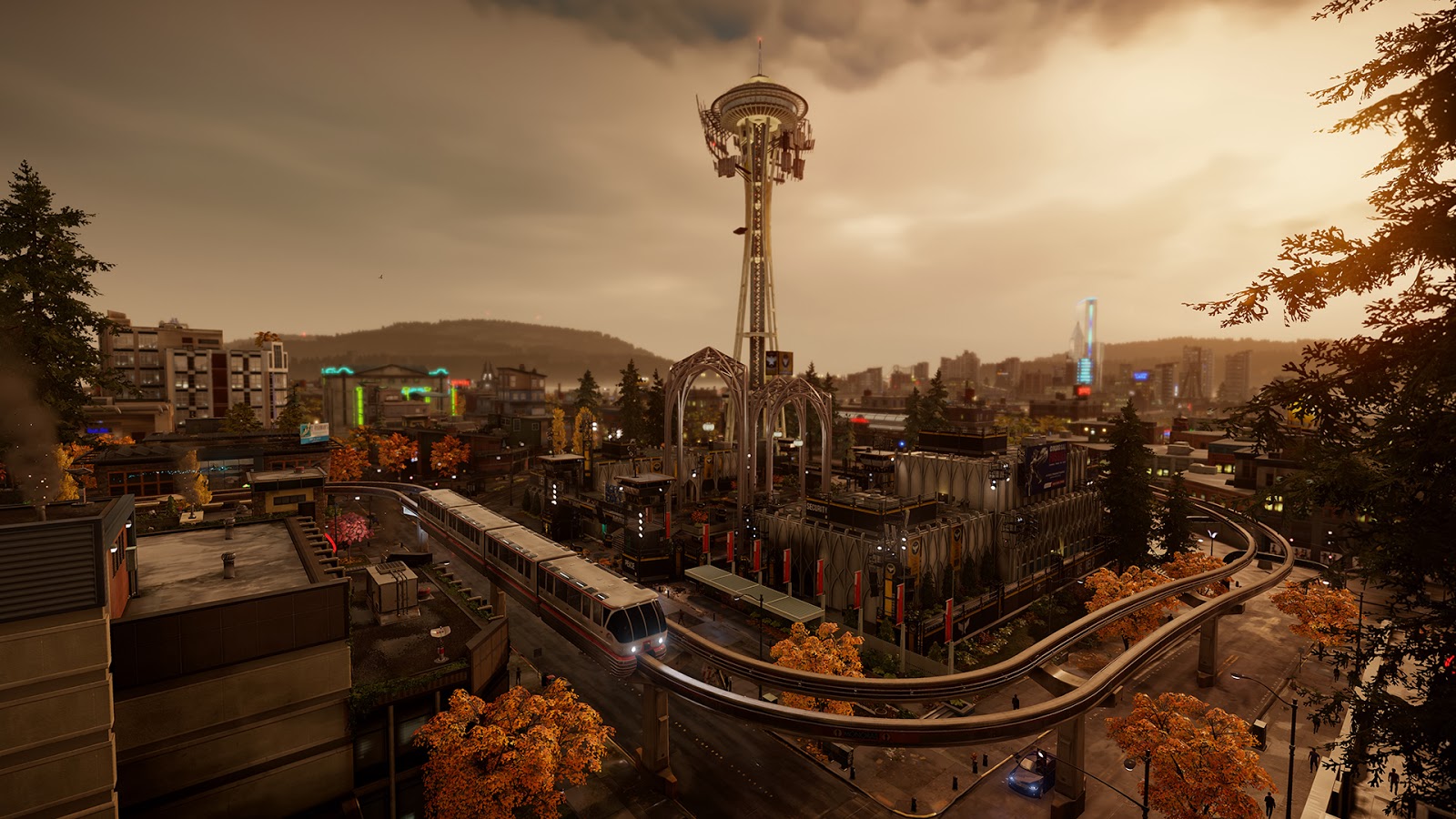 The dockside mission essentially gives you a chance to flex your muscles as Delsin and brings out the combat element of the game as you unleash seven shades of hell on the bad guys. Ploughing through the air and using a neon draining capability, Delsin's abilities (or afflictions as his brother terms them) are pretty obvious pretty quickly. His weapon of choice is a neon lance which pummels the baddies into submission (and there are a lot of these in this first mission). Melee attacks, hurling smoke bombs and rushing up buildings give the game a bit of a rush but don't feel like a massive departure from the first two games - though, when you've got a winning formula, why would you? It's really in the graphics that this game starts to soar though - beautiful crisp neon colours give it an edge in the dark city of Seattle and leap vibrantly off the screen as they hang there. It's a visually impeccable touch which adds a lot to the feel of Second Son.

While the houseboats search proves to be easy enough once you get the hang of it (kill the dealers, tag the houseboats, let anyone out who's in there), the tantalising glimpse of Delsin's new powers at the end of the level, a radiant sweep, offers a more epic edge to the game. Sadly, I didn't get to see the full effect as the screen faded to black.... 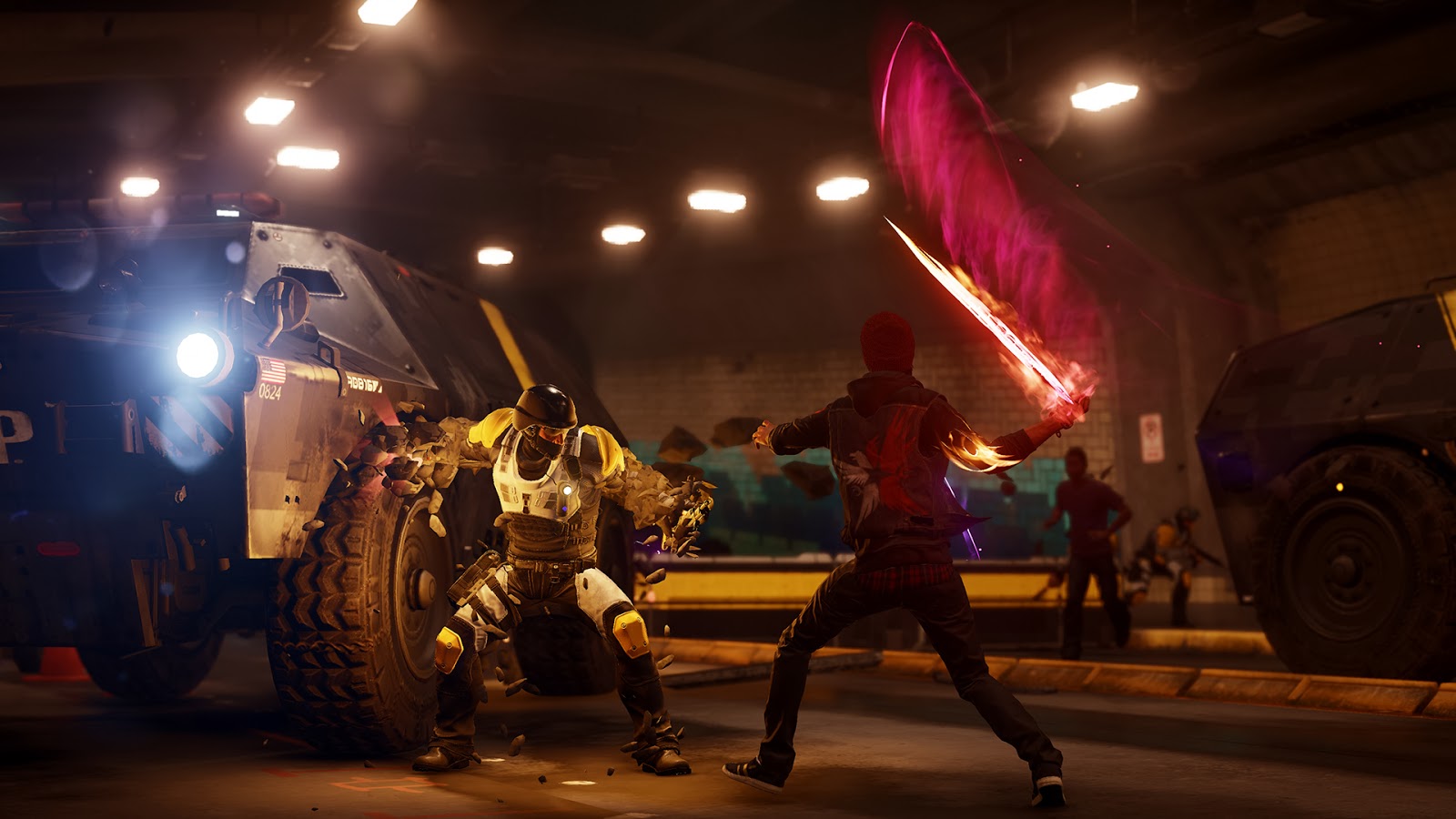 Looping back to the same cut scene, the chance is given to Corrupt Fetch and this is really where the game starts to kick loose and you get to unleash the bad side of your psyche. After a spat with Reggie, the pair decide to take on those who are protesting about the Conduits and teach them a lesson - cue a similar hunt to the houseboats (but with do-gooders squarely in your sights) as you leap round through the air, and just melee whatever you want.

Interestingly enough, the decision to go rogue puts you into conflict with yellow army types known as the DUP, an oppressive bunch who appear to have some powers as well. These manifest in them leaping around and employing rock-like weapons to lock you into the ground (a kind of concrete boots) before shooting you.

It's here you have to employ a bit of strategy - taking too much fire means Delsin's ability to fast heal drops off and you risk death if you don't simply run away. Also, tougher bad guys mean using the environment to your advantage - and the chance to wreak havoc means that anything goes. Just occasionally, this demo struggled with the camera angles on the conflict, meaning Delsin was super-imposed by something on the street, blocking my ability to see and fight. It's a niggle - and one which I hope will be ironed out in the final game next month. It ends with another glimpse of a new power, the Orbital drop, before fading to black.... 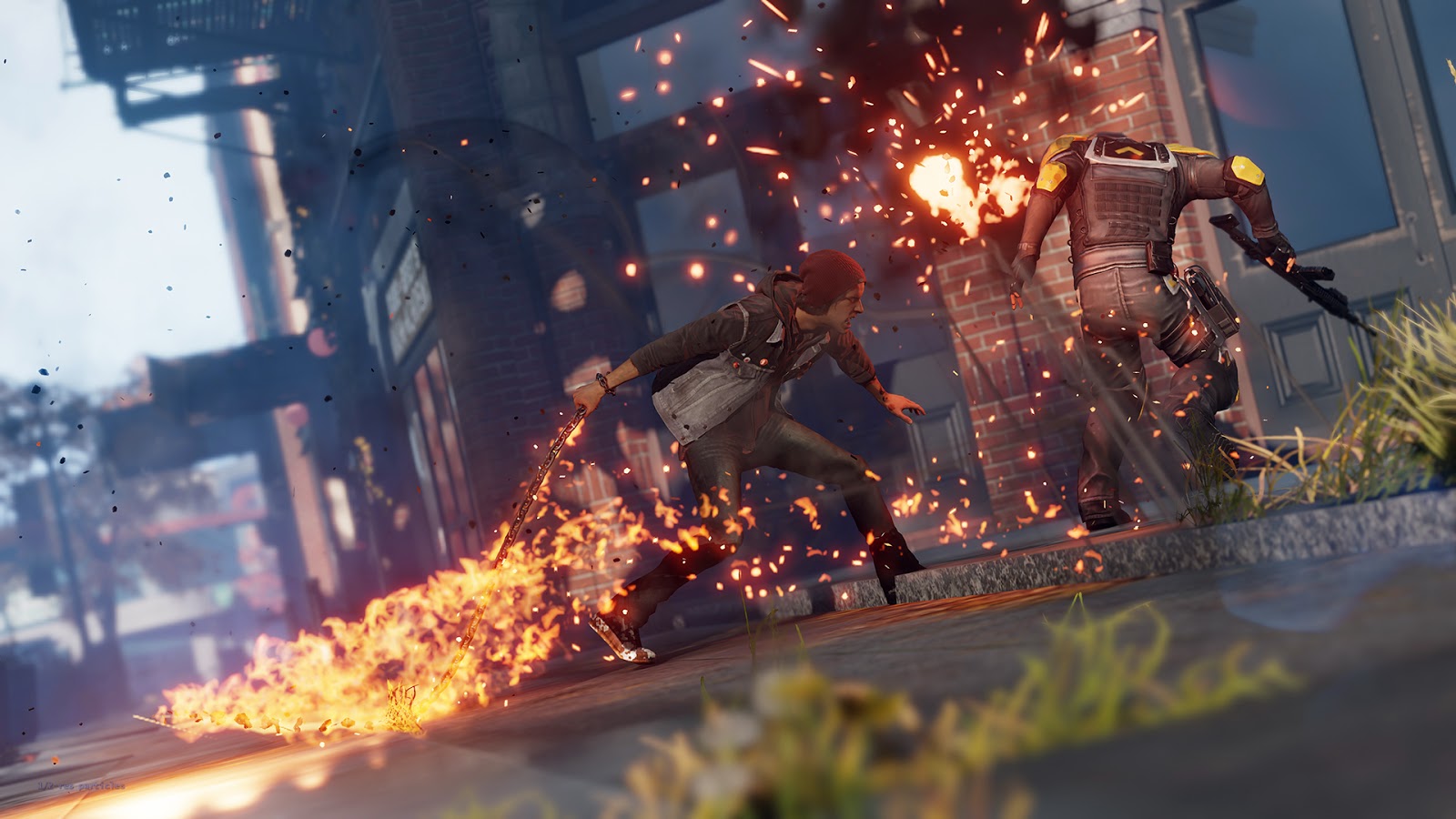 While there was no option to play Fetch, there's no word yet that that is permanent - but it's to be hoped some iteration of the game will proffer up that chance, either at launch or in DLC. However, Fetch appears to work with Delsin in both missions, shooting from afar to take out baddies and that's a nice touch.

Overall, Infamous: Second Son's demo hints at greatness to come on the PS4. The moral compass is once more in danger of swinging either way in the game and the graphics hint at an impressive next gen experience that's likely to draw off the naysayers. I'm hoping the story proves as similarly engaging as the first two games because that's what will keep many playing on - though based on the combat of these two missions, there's a hell of a lot of fun and deep gameplay to be had from the upcoming release.

Either way, sign me up as a conduit, because I'm hellishly excited to see what Sucker Punch are bringing to the PS4 and the Infamous series.