The director and star of Brick re-team for Looper, a film which is likely to be on a lot of favourites' lists by the end of the year. 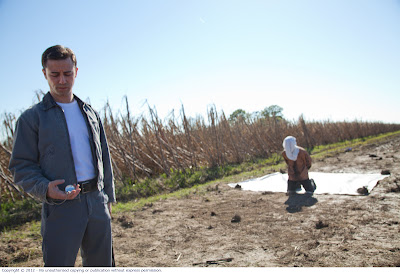 It's Kansas, 2044 - Joseph Gordon-Levitt is Joe, who makes a living working as a Looper, an assassin with a twist. Basically, in 2074 time travel becomes a reality and the mob use it to get rid of anyone they don't want alive. By dropping the victim back 30 years in time, the Looper takes care of the job.

However, the future's under threat from a kingpin known as the Rainmaker, who's "closing all the loops" by systematically sending back the future versions of the assassins to be taken care of their younger selves.

One day, Joe's out on a job and the future version of himself (Bruce Willis) drops into existence, for execution.

Only older Joe manages to escape - and it's upto younger Joe to close the loop.... 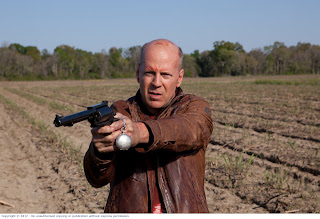 Looper is an utterly incredible movie - I've yet to see anything match it for intelligence, intensity and surprises  this year. The Looper trailer gives little away and really wrong foots you to a degree.

From a brilliantly realised future / day after tomorrow world which blends seemlessly into the background of every shot and gets it spot on with the look and feel of future technology through to a continually surprising storyline, Johnson hits every right note from the get go.

It helps that he's blessed by another riveting performance from Joseph Gordon-Levitt, who under a few prosthetics oozes the gumshoe/ hitman appeal and hits the genre spot on as well as offering a mature take on his role. He's also got the steely determination downpat as the story goes on - and in his scenes with Bruce Willis, it's pretty obvious to see the future connection between the pair.

Talking of Bruce, by putting away the smirk and actually doing some proper acting for a change, Willis adds a lot to the story and gives Joe the humanity and warmth that he's lacking as a younger junkie version of himself. It's a sympathetic turn and one which may catch you off guard. 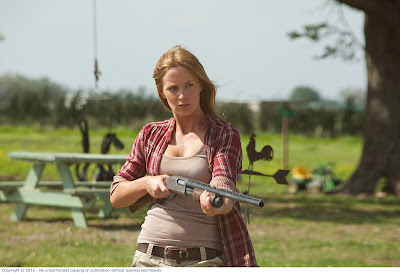 The thing with the movie Looper though is, to be honest, you're best going in to it without any idea of what lies ahead. Sure, you're promised a time travel story with some familiar ideas and ethics, but what Johnson actually delivers is rich in story-telling, blessed by great character acting and uses the sci-fi as a construct for the narrative rather than the sole purpose of it.

Throw in the continual surprises of the story going where you'd least expect it and it's one of the freshest films of the year.

If you're a sci-fi buff, you'll know it plays with some familiar time travel ideas and ethics - but it is also a strong character piece as well with the relationship between Emily Blunt's character Sara and Joe being a central tenet and tent piece to what evolves.

Looper is an easy contender for one of the films of the year - it offers a new thematic take on a few old ideas and is dazzingly original, ambitiously fresh and stays with you for days after you've seen it - something which has been so rare this year.

Do yourself a favour and see one of the best genre films of 2012.