Adapted from Duncan Sarkies' 2008 book of the same name (which I will confess I've not read), Two Little Boys stars Bret McKenzie in his first cinematic lead role.

It's off to Invercargill in the early 1990s as this dark comedy centres on two very good mates, both mulleted and both looking distinctly bogan.

McKenzie plays Nige, who's been living with Blake's Deano in relative domestic bliss (but not like that) for some 15 years. 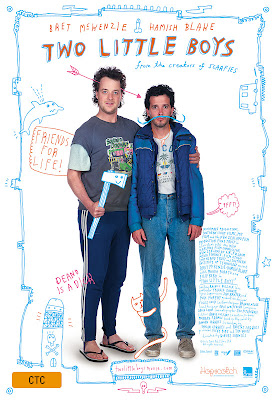 As it begins, Nige's doing some laps around the centre of Invercargill and inadvertently knocks down and kills a Norwegian tourist. Panicking, Nige throws the body into a hole, conveniently in the centre of the road and runs to his mate Deano for help.

But, after 15 years of friendship, Deano and Nige have had a falling out and Deano, the slightly psychotic bullying type isn't going to forgive Nige any time soon for leaving their home and shacking up with general nice guy and security guard Gav (Pohatu).

However, when Nige reveals what he's done, Deano's got no choice but to try and help his mate - and so begins a massive misadventure as the three of them (and a body) head down to the Catlins to dispose of the evidence.

Only Deano's got more than the disposing of one body on his mind...

Two Little Boys is an odd film - a twisted tale of bromance gone bitter; of friendship heading south, of finding your own confidence to stand on your own two feet and of how far you'd go for your mates.

It makes a good fist of the moody Southland coast and the Catlins themselves but does little to populate the tale with either comedy or dramatic weight to flesh it out. Sure, there are some good one-liners throughout
and some amusing sight gags (a panicking Nige tries to carry out CPR on the tourist despite his body being upside down) but all in all, this has such a mismatched mix of tones veering from dark, gruesome and attempting comedic that it doesn't come out smelling of, unfortunately, anything other than a bit of a mess.

McKenzie (when his Nige is not having a panic attack) does relatively well for his mulleted bogan but has little to work with; likewise Blake has a few darkly comic moments but is saddled with some pretty unfunny lines for a supposed comedy.

I think the problem with Two Little Boys is one of tone throughout; it has throwbacks to the bleak comedy of Predicament but doesn't have enough to really back it up with any dramatic meat or real character engagement.

Director Sarkies really comes alive with some brilliant touches towards the end (which had been deployed throughout would have sent this into offbeat watchable kookiness) but it's an incredibly long slog getting to that point. While there are touches of the dark underbelly of New Zealand being exposed, Two Little Boys is an uneasy and occasionally queasy mish-mash which feels like an opportunity much squandered.