In space, no-one can hear you scream.

Which is kind of sad because this latest from the director of Children of Men makes you want to scream from the rooftops about how incredibly good and technically impressive it is. 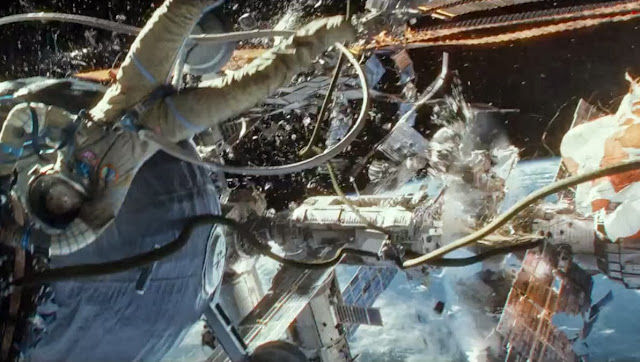 George Clooney and Sandra Bullock star as two astronauts in space. Clooney is Matt Kowalski, a retiring astronaut; Bullock is Ryan Stone, a medical engineer working in space for the first time. When debris from a Russian satellite heads their way, the pair is thrust into a life and death battle to survive above Earth....

Gravity the movie is an incredible, utterly thrilling experience from the moment it begins.

It opens with a jaw-dropping shot of life above the Earth, which fills the screen and seriously impresses with the detail of the world below and captures the utter majesty of space. The opening shot tracks around the space station that Kowalski and Stone are working on and the world around it are completely awesome in the true sense of the word. It's a bravura start to an emotionally intense film which is more experience than traditional movie in many ways.

But as the relative peace of the skies and Ed Harris' mission controller voiceover begin to lull you into a false sense of security, Cuaron rips the rug from under you and ramps up the tension with a series of set pieces which assault the senses, both visually and aurally.As the empty skies fill with debris from the satellite and the OST builds perilously loud, the fear factor rises higher than you'd imagine possible and thanks to a rising crescendo of sound and visual FX, the tension forces you to the edge of your seat. 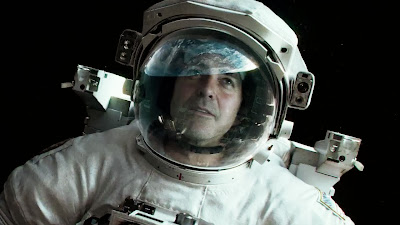 While Clooney's Kowalski relies on years of experience to relay a sense of calm to try and save the crew, Bullock's Stone realises how badly this fish is out of water and starts to panic causing untold problems for the pair of them. But rather than relying on traditional narrative to tell the story, Cuaron uses a series of incredibly clever visual tools to take you into the heat of the action within the vacuum of space.  One shot starts from the outside perspective of Stone before taking us inside her helmet and suit, with her every gulp of breath fogging up the view - it's a clever and visually audaciously adept way to get under the skin of the character and to take the audience right into the heat of the action.

And yes, there is action, which you may find startling for a story which is essentially two astronauts floating around the void of space, desperately pinballing from one hope of escape to the next. It comes in the form of intense bursts from Cuaron which are perfectly well-timed as the nightmare plays out. While there's certainly an argument that the ending is creatively weak and a little disappointing (a degree of ambiguity and an ending earlier on would have worked a lot better narratively even though there's an argument that some form of resolution is needed), Gravity is nothing short of nail-biting claustrophobia on the big screen. 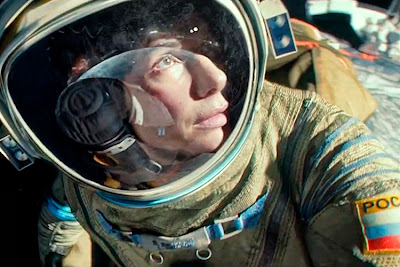 Clooney impresses as Kowalski, the old timer whose knowledge of how to survive kicks in but it's arguably Bullock's film.

In among her flailing and falling into the dark expanses of space, Stone undergoes a metaphorical and spiritual journey as the reality of what she's facing kicks in. Coming to terms with the loss of a child, the loss of the space pilots around her and her impending death, she undergoes the gamut of emotions and takes you along for the ride too.

However, it's the film which is the real hero of the piece - a visual feast and terrifying symphony with plenty of head-scratching as to how exactly they achieved the final effect, Gravity is as close to being in space as many of us will ever achieve - it left me with goosebumps as I gorged on the wonderful FX (see it on IMAX in 3D with the loudest sound system around if possible) and at times, contemplative nature of the story.

Gravity is easily one of the films of the year - it's an utterly unmissable experience and a thrill-packed suspense-filled ride which will have you on the edge of your seat from beginning to end. As the fear envelops you, it will leave you breathless.