Well, to be more accurate, the Bond franchise is celebrating its 50th anniversary this year and the latest, Skyfall, (the 23rd outing for Ian Fleming's spy) has its work cut out for it - present a nostalgic look at what Bond's done and as well as demonstrate what the future of the franchise could offer. 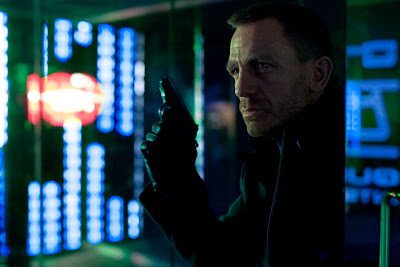 Fresh from delivering the Queen to the London 2012 Olympics, Daniel Craig returns for his third outing as James Bond 007 in the Skyfall release.

Tasked with retrieving a hard drive, containing a list of undercover British agents, the pressure mounts for Bond to ensure success in his latest mission. But when it looks like he's about to fail, M (Judi Dench) orders Bond's fellow agent Eve (Harris) to take a shot and take out the man who's stolen the hard drive.

However, the agent accidentally hits Bond and sending him plummeting from the heights of a moving train in Turkey, he's believed dead...

When MI6 comes under attack and M is targeted, Bond decides, out of a fierce loyalty, to come out of his shell to track down the people behind the threat - no matter what the cost.... 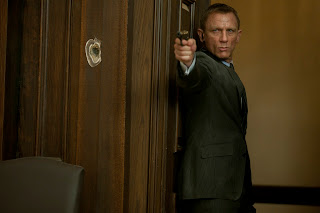 Skyfall is as thrilling a James Bond you'd expect to get for the franchise's 50th anniversary - and one from such a director as Sam Mendes.

Tautly pulled together and respectful of the franchise's past, it's a pulse-racing ride - right from the beginning with an opening sequence which takes in rooftop bike chases, street chases, and a crane atop a train in Turkey. The opening packs in as much tension and spectacle as you'd expect from the franchise.

Daniel Craig is very good as a wounded Bond - through his piercing blue eyes and pursed lips, the hurt he conveys after returning from the dead to confront M, says more than any exposition and over-acting could ever do. This is a Bond who's faced a near-death experience, begrudgingly lived to tell the tale and appears slightly resentful of the loyalty he's expected to show. Towards the end, when Bond reveals a little more of his past, it seems to add a level to the agent and give him an emotional resonance which has been missing in previous outings. 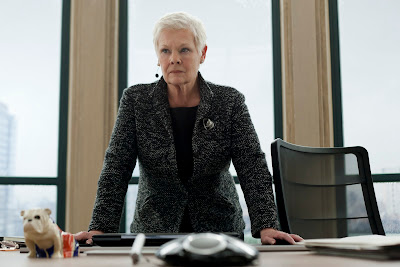 But, in all honesty, this film truly belongs to an exceptional performance by Judi Dench as M - as her past catches up to her, Dench conveys a whole range of emotions, from haunted to hunted, with a deft turn which commands the screen whenever she appears. When her time comes, she will be much missed from the franchise. This time around, through a nuanced and excellent turn, she's added emotional complexity and heart to the relationship between M and Bond.

Beautiful cinematography (a sequence where a high-rise Singapore showdown takes place is all done in shadows with neons and computers providing the backlighting), smart crowd pleasing nods to Bond's past and a strong debut from Ben Whishaw as Q mean this Bond will resonate with all concerned who proffer up their cash to witness the latest. Skyfall by Adele is also a great addition to the previous Bond opening credit montages. 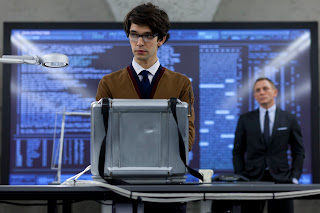 That's not to say that Skyfall doesn't have its flaws, though.

After an exceptional start and opening sequence, the very slight story (it's just about revenge, folks) appears to sag slightly during its middle section as the relatively threadbare plot starts to shine through. While it's a relief that the plot's a little lighter after the last Bond Quantum of Solace's muddled bland mess, the 150 minute running time could have been trimmed a little to give it a hint of leanness it needs.

Also, I have to admit, I'm somewhat on the fence over Skyfall's bad guy, Raoul Silva, under-played by Javier Bardem in a blond wig. While he brings some of the unhinged menace, with a hint of sexual ambivalence, he doesn't quite hit the mark as a truly memorable Bond villain in my eyes. (I think in fairness though, everyone, Bond included, are incidental to this film with the whole movie pivoting around Dame Judi's M.)

"Sometimes, the old ways are the best" is an adage quoted a few times in the knowing script - and this in many ways, could be applied to the whole film and franchise itself.

Better than Quantum of Solace but not matching the highs of Casino Royale, with crisply lean action sequences, a few knowing quips, some impressive acting and an emotional resonance, Skyfall is perhaps the perfect Bond for a 50th anniversary. It shows the franchise has a life to live and effortlessly demonstrates the best is yet to come.