Joss Whedon's much- vaunted The Cabin in The Woods gets its small screen release after a very strong showing in this year's Incredibly Strange Festival outing. 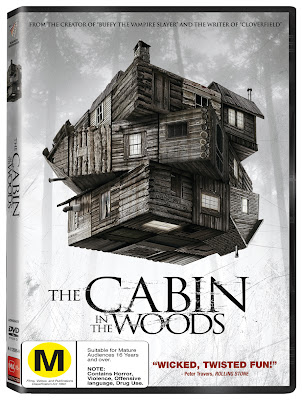 Let me say now, this review won't proffer up anything of the spoilery nature as you're best going into this completely fresh and without any prior knowledge.

Suffice to say a group of good looking teens (including NZ's very own Anna Hutchison as a cheeky vixen) head into the woods for a weekend away - but as ever, when they get there, things turn rather hellish.

And that's all I want to reveal because, if you go into this knowing little, you'll be sure of a few major surprises.

Billed as genre-mashing and genre-bending, The Cabin in The Woods is actually a pulpy, trashy piece of meta film which plays with horror conventions, mocks the twists and turns and slaps on the smarts as well as the laughs.

There's also a lot of horro gore too as the cleverness unfolds.

Best watched with a group of mates, The Cabin in The Woods is a bit of a self referential enigma, as you can't help but feel that you've been subverted and had your expectations messed with as it unfolds.

This effective genre piece is grounded by great performances by Richard Jenkins and Bradley Whitford and is peppered with in jokes that horror fans will lap up. Humorous, shocking and a sly tipping of the genre, mean that Cabin will be a cult hit that deserves a wide audience on the small screen. Fans of Joss' previous outings will be buying this en masse and if you want to see what the buzz is all about, you'll be smart enough to join them.

Extras: Making of, Make up and animatronic effects and visual effects. My only real comment on these - why no commentary???!!!!