There's electricity in the air in Brit film The Selfish Giant.

From filmmaker Clio Barnard who came to our attention with the Arbor, is this latest tale, based loosely on the Oscar Wilde short story of the same name.

Focussing on the sweet, yet dysfunctional, friendship of two 13-year-old boys, Swifty and Arbor (both young actors delivering stunning performances), it's the story of their lives in the grim up-north British world of council estates, continual debt and scrabbling to make ends meet. 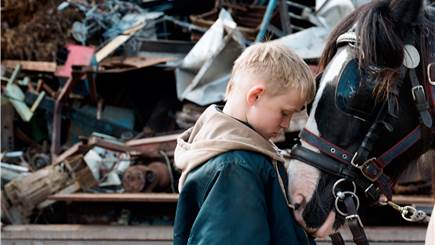 The pair first form a friendship after being excluded from school; forced to stay away, they end up feeling entranced by the world of Kitten, a scrap dealer, whose den of inequity holds the promise of money which so eludes the duo and their families.

It's Arbor who leads the way into a world of collecting junk and trying his luck, with Swifty more interested in the horses that Kitten owns - and particularly the ones which he races on the streets in yet another example of how gypsy culture's become so prevalent within the UK.

But Arbor's a live wire in more ways than one - and when he sees there's money to be made from stealing and melting down wire, he throws the duo on a collision course with tragedy as the inevitable ante is upped and Arbor searches for a big pay off.

The sensitive gentle giant Swifty, with his love of horses, makes a perfect foil to Arbor's ADHD pill taking troublemaker. But at the end of the day, this is a story of friendship and of a relationship torn asunder either by petty jealousy when Arbor discovers Kitten favours Swifty for the racing or tragedy when the final big steal comes around with an audience inducing shock. It's sensitively told, and devastatingly painful as the final scenes play out.

It's here the young actor playing Arbor comes to the fore - his final scenes hanging around the streets are raw with pain and emotion and recall some of the behaviour of the Greeks in mourning.

Make no mistake, while this grit Brit hit is a tale of woe, it's got a vein of humour running throughout which is impossible to deny and black humour which is as hilarious as it is heartfelt. The council estates bring the miserabilism but film-maker Barnard keeps it on the right side of dry humour rather than dour depression.

You'd have to have no heart to be moved by The Selfish Giant; its two young leads are spectacular and its cinematography is stunning to view - sure, there's electricity in the air in this film - and it crackles with cinematic aplomb and storytelling genius. Highly recommended.
NZIFF Review - The Selfish Giant