They say all good things come to an end. 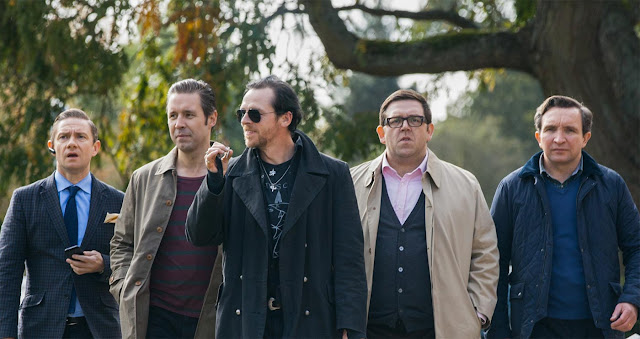 So it is with the Cornetto trilogy, aka The Blood and Ice Cream trilogy, which began back in 2004 with Shaun of the Dead and grew to a phenomenon with 2007's Hot Fuzz.

Simon Pegg re-teams with on screen buddy Nick Frost and behind the camera whiz Edgar Wright for this latest, which sees Pegg playing initially a little darker than he has done before.

Simon Pegg is Gary King, a black coated, black haired and distinctly Gothic lizard of a man who believes the best year of his life was when he attempted a pub crawl (aka The Golden Mile) in his home town of Newton Haven.

Determined to finish what he started for reasons initially unclear (though hinted at with some kind of family tragedy), King attempts to pull back together the other four players in this epic challenge of alcoholic proportions and put the band back together for one last boozy night out. 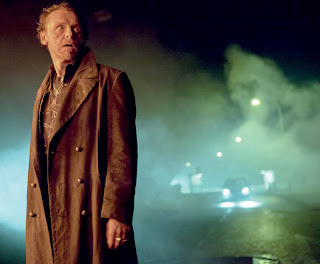 However, in his unswerving dedication to the amber nectar, he's ignorant to the fact most of the gang have moved on - and one is still harbouring a grudge over treatment from all those years ago.

Paddy Considine's Steven now works in housing, Martin Freeman's O-Man is an estate agent with a blue- tooth permanently wired to his ear and Eddie Marsan's Pete is a respectable man with a family of two kids in suburbia. The final link is Nick Frost's Andy, a partner in a firm and the one who feels most betrayed by King's behaviour and lies.

But, against all the odds, King manages to pull them together and they all pile into his car from the 80s (which he still owns) and head back home to try and complete the legendary pub crawl, no matter what.

However, when the quintet hit the Haven, it appears not all is what it seems and soon, Gary and the gang are facing a fight for their lives, and potentially the planet's future.

The World's End is an epic, exciting and giddy end to the Three Colours Cornetto series.

It's still Pegg and Frost as you know them, but this time, the world's been created on a larger scale - both in budget and characters.

So, it means all the main players have had to severely up their (already high) game and the end results are truly beneficial for the audience. Pegg's brought a complexity to his Gary King which marks some of his best work. Initially distinctly unlikable, Gary is a bit of a hard ask when it comes to eliciting sympathy. But it's as if Pegg knows that and has imbued his Gothic quest leader with an infectious energy, even if he does seem to harbour several personality disorders.

And Frost is utterly incredible in this - confined to the (relatively) oafish roles in the first two films, here his Andy is the straight man for a change and is completely watchable for it. Many of the crowd pleasing moments are elicited by Andy's behaviour and to say more on that front, would spoil the pleasure I felt when those moments came to the fore. The core dynamic is still there at work and still the bonds of friendship ring true, regardless of how initially fractious they may be.

By widening the ensemble cast, Pegg, Frost and Wright have ensured there's more of a dynamic at play without ever losing the tight plotting, jeopardising the story and providing smart and silly pay-offs. And that's the thing about The World's End, it is remarkably silly in places, but it's the kind of goofy fun which leaves a wide grin on your face. The sci-fi elements are brought to the fore in this story as the likes of The Stepford Wives, The Village of the Damned, The Invasion of the Bodysnatchers and The Thing are all referenced. 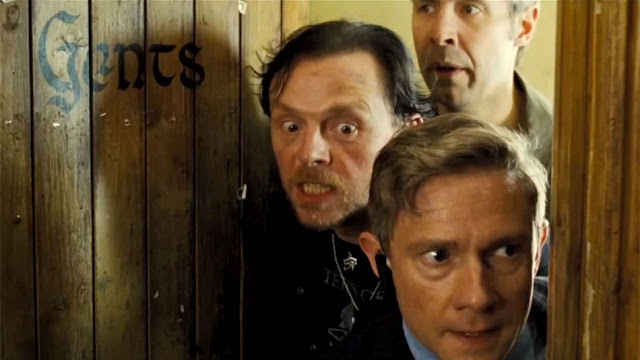 But, by choosing to lace the script with these moments rather than hang it on them, the story is all inclusive and universal - it's about growing up, losing and rediscovering friendships and staying true to your youthful dreams, despite life trying to force you into maturing.

Considine brings stoic solid support as Steve, Martin Freeman adds a deadpan edge as O-Man but it's Eddie Marsan who is the best of the ensemble. There's a tragic pathos to his turn as the put upon Pete and his underplaying is much to the advantage as the story unfolds.

Wright also needs to be commended as well for adding in a new layer of action to his directing cannon. Early scenes may be slower, concentrating on the relationships and interplay, but once the action begins, the wonderfully choreographed moments unspool with such frenetic yet careful ease.

However, Wright doesn't lose the personality of his characters as the action plays out. One bravura sequence sees Pegg channelling some of the best silent comics as he tries to administer a beat-down while not spilling a drop of his pint. It's impressive stuff and certainly adds a level that could make Wright someone to watch when Ant-Man comes out in a few years.

With an impressive OST recalling some of the best of Britpop and a sense of emotional darkness, The World's End is a gritty yet silly end to the trilogy; it's one which suggests all the players are ready to move on, but are celebrating one last blast before calling time, gentlemen.