Woody Allen returns to the big screen after the recent relative creative disasters of You Will Meet A Tall Dark Stranger and To Rome With Love. 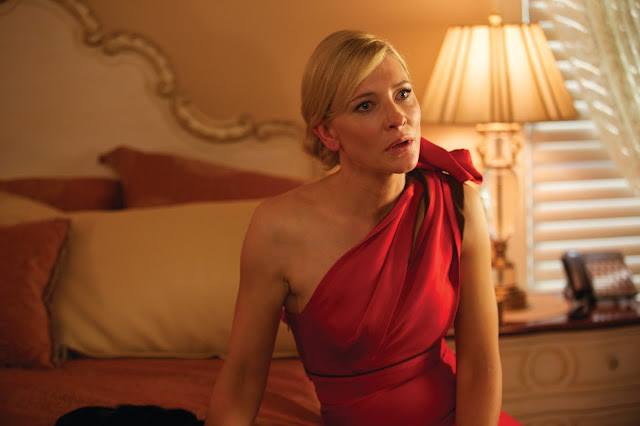 In this latest, Cate Blanchett plays Jasmine, a former New York socialite forced to live with her working class sister, Ginger (Hawkins) in San Francisco after her husband Hal (Baldwin) is indicted for fraud and takes his own life. But Ginger's not seen Jasmine since she and her now divorced husband Augie (Dice Clay) were caught up in the fraud and lost everything.

But the ghastly Jasmine lives in a daze, and is unaccepting of what has happened and recovering after a nervous breakdown, meaning that her relationship with her sister becomes ever more fractious as time wears on. However, it looks like things may be on the turn for Jasmine after she meets Peter Sarsgaard's suave Dwight, who's her social equal and potential future.... 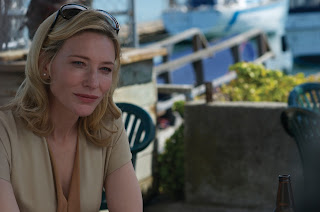 Blue Jasmine is a fine return to form for Woody Allen, whose last couple of outings have been self-indulgent guff filled with trademark self-absorption.

Granted, Cate Blanchett's bankrupt Jasmine is as self-obsessed as they come, but thanks to a multi-faceted and resonant turn from a brilliant Blanchett as she spirals down and a tight script which sparkles rather than flounders, the film is a soar-away success. Wrapped in swathes of designer gear, popping pills, swilling copious martinis and blissfully ignorant ( in the way that someone who's living in denial only can) Blanchett delivers a powerhouse performance that's layered and complex as she spins through life unaware. She's a nasty creature, horrified when her sister visits in her former life and scornful and resentful of the time she steals away from her other more trivial plans. She's ghastly in the extreme and steals every moment the camera gives to her.

But other players sparkle too - specifically Hawkins' turn as the sister, who's initially reticent to help her after she's been burned by Hal is an impressive one, embodying the awkwardness of someone holding back, then embracing her sister's ideals and finally realising that it's not all it's cracked up to be. Alec Baldwin similarly impresses, while Sarsgaard and Louis CK don't quite get enough time on screen. 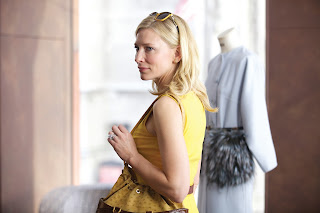 Allen's also to be commended for throwing together a fully rounded script for the first time in a while (even though it draws on a similar story to Streetcar Named Desire, where one down-at-luck sister moves in with the other. It's one which tackles life post recession and failed finance companies. It's a straight forward piece that doesn't rely on portmanteau or intersecting lives for its twists and turns, and simply uses the narrative as it should be used.

Blue Jasmine is to be frank, Allen's best for a long time. A return perhaps to former form and ideas, this tragedy soars - predominantly thanks to a mightily impressive turn from Blanchett. I'd be surprised if she doesn't receive an Oscar nomination for this.