Motor racing films have not really been well served over the years.

Sure, there's been Days of Thunder, Talladega Nights, The Fast and Furious series - but it's really only ever been the documentary genre that's really got under the skin and thrill of the sport. TT3D: Close to the Edge was astounding and Senna was heartbreakingly good - but they both fully explored the reasons for people doing what they do rather than serving the racing up as a sidebar to the drama. 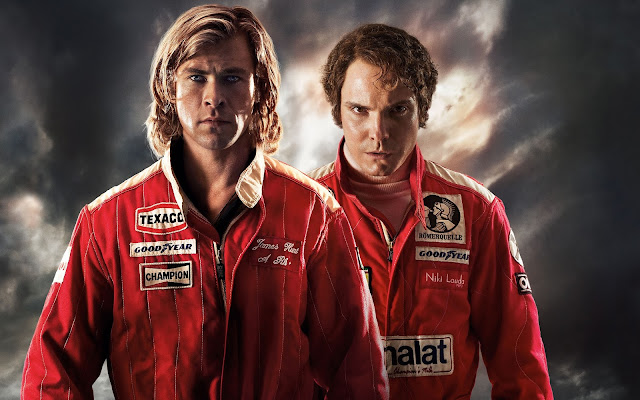 This latest drama, from director Ron Howard, takes a look at the prolonged rivalry between British Formula One driver James Hunt (a blonde mopped Chris Hemsworth) and Austrian driver Niki Lauda (stunningly played by actor Daniel Bruhl) which ran from 1971 to 1976.

Howard chooses to tell the story as a battle between two rivals who are cut from the same cloth but are diametrically opposed in outlooks on life and attitudes.

Hunt is a playboy, who's as interested in notching up marks on his bedpost as he is in winning races. He works his way up the Formula 3 tracks to win and gradually ends up in the big league. Lauda, in contrast, uses precision and calculating psychology to achieve his goals - and some money to buy his way into the Formula One world. Their rivalry is formed in their formative years on a formula 3 track and culminates in a disastrous race in 1976 at the Nurburgring track.

Ron Howard's crafted a racing film that's as much about the drama off the track as it is on. By choosing to keep the racing shots to a minimum until the final crucial race, he's ensured you're fully invested in the characters as the inevitable happens. Perfect attention to period detail throughout and some tautly put together racing ensures the feel of the Rush movie is epic and yet still intimate. 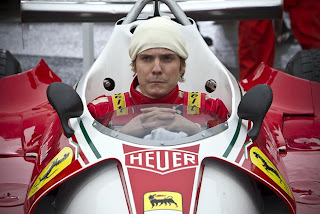 While it's Hemsworth's larrikin Hunt, with his laddish bed-hopping ways and his braggadacio, whose face beams out from the film poster, this is actually more Daniel Bruhl's film and Lauda's story. Hemsworth's clipped English accent occasionally fades into Aussie drawl, but Bruhl's precision and the way he's captured Lauda's precision, apparent social ineptitude and veneer is second to none. In fact, Bruhl excels in this, using understated characterisation to bring the so called rat to life; whereas Hemsworth's handed a role which is the complete opposite - he takes the spoils of a posh boy ladette in a world looking for a racing hero - both are perfect examples of why F1 drivers are held in such high rockstar esteem and what drives them to risk their lives during every race.

But Howard's also had a hand in this, subtly building up the relationship over various encounters and stretched throughout the years; minor comments here and there craft together a relationship and rivalry which is relatable and utterly engrossing. Using archive footage here and there, he's also managed to capture the atmosphere of the races.

And talking of the races, Howard's recreation of the key moments is every petrol head's dream. From the sound of the engines revving to the pump of the pistons, by using sweeping camera shots and occasional driver point-of-view shots, he's captured the thrill of the race, the adrenalin rush and the reason the drivers do it. I'm not a Formula One fan by any stretch of the imagination, but what he's created on screen is utterly addictive. 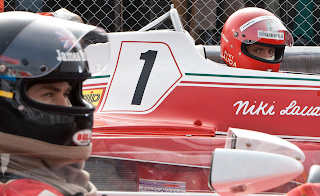 Some other elements of the film, unfortunately, don't work quite as well.

A few characters here and there appear, seem to form part of the story and then simply disappear, leaving a narrative unfulfilled (Natalie Dormer's character being the chief culprit); he uses way too many voiceovers to service the film's exposition - and while it's clear he's trying to capture some of the psychology and inner thoughts, the over-use makes it feel tired and grating in places; the film feels a little overlong as well - it could have easily lost 20 minutes and still been as riveting - and it feels as if it doesn't quite know how to end with a post script to the crowning of the World Champion feeling unnecessary and unwarranted. I'm hoping that the story of the rivalry will be a more universal one as well as it'd be a shame for non-sports fans to pass this one by.

All in all, Rush is a compelling and captivating piece of cinema - it's gripping, riveting and a superb insight into sporting rivalry both on and off the track.