From the "What would you do?" file, comes this brand new bleak thriller which is edge of your seat stuff from the moment it begins. 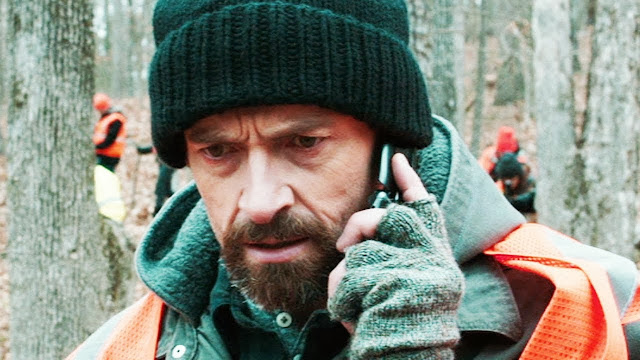 Hugh Jackman stars as blue collar worker Keller Dover whose motto is "Be ready"; his basement is prepped for the worst - be it hurricane or nuclear incident. But Keller and his wife (Maria Bello) are not prepared for what happens when they go to their neighbours Nancy and Franklin (Davis and Howard) on Thanksgiving.

When Keller's daughter Anna and their friends' daughter Joy go missing, their worlds are thrown into utter disarray. The only lead is a ramshackle RV seen lurking around the neighbourhood prior to their disappearance. But when the police, lead by detective Loki (Gyllenhaal in commanding form) have to let go their only suspect, the mentally retarded Alex (a creepy Paul Dano), Keller goes into overdrive, vowing to do whatever it takes to rescue his daughter.

But Keller discovers desperation has a price - is he willing to pay it? 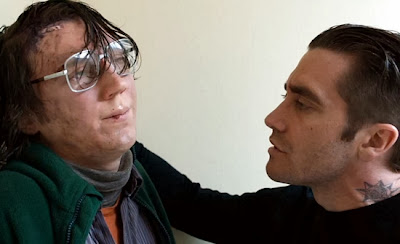 Prisoners is without a doubt, a film of dread and utter creepiness. Proffering up suspense, masterful acting and unbelievably mysterious twists as the tale is told, it's gripping in a sickening way as it unfurls. Mainly it's due to Hugh Jackman's Keller Dover; his character is pushed to the very edge and the film begins with him reciting the Lord's Prayer, seeking guidance for the day. When it's repeated again later in the film, it's to bear witness to a man on the edge, about to make a monumental defining move, but one which feels completely understandable and horrifically relatable. Jackman brings to the screen a soaring rage-filled performance which has set the standard for the wronged man and the man seeking vengeance. But it's never a showy turn merely one that shines due to its intensity and one which fills the screen with realism.

Likewise Gyllenhaal and Dano; their performances are more dialled down than Jackman but they don't lack any less of the intensity. Certainly Dano's quiet performance as the man child accused of the abduction is totally memorable and disturbing; Gyllenhaal brings a steely yet subtle determination to the rural cop uncovering a world of horror as he tackles every parents' worst nightmare. It's also an exploration of evil begetting evil as all involved spiral deeper down into the abyss. 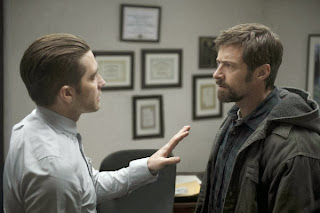 So it's a shame to note that despite all this praise for a grim and gritty thriller that's relentless and captivating as it unspools in Mid-America that there comes a caveat to the film - its ending. Despite the suspense that's been built up over the 140 minutes of running time, a Hollywoodesque ending which sees the normal procedures jettisoned in favour of forced drama; likewise, a final sequence which would have ended the movie on a formidably downbeat and realistic moment is tossed out (no doubt on the whim of a test audience) to satiate the Hollywood machine.

Overall, Prisoners represents a crime thriller film which owes a debt to the darkness of the likes of The Killing and The Vanishing and its ilk - it sickens as it tightens its grip on you as the emotional complexity builds to fever pitch, leaving you clenched to the edge of your seat as its powerful yet realistic story reveals its twists and turns with unnerving yet breath-taking intensity.