So, the adventure continues. 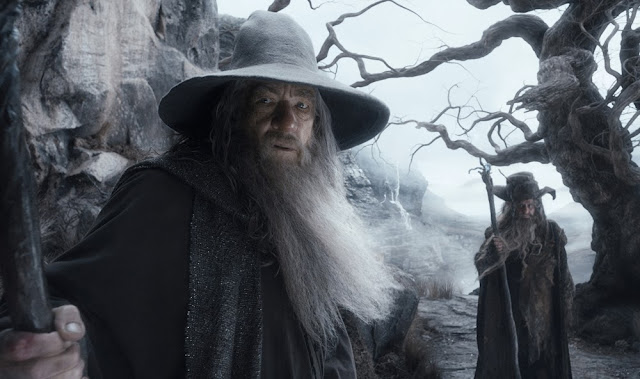 It's the second part of Peter Jackson's Hobbit trilogy, and all eyes are on the film to ramp up the action and introduce some new characters (one a woman in the form of the elf Tauriel, played by Lost star Evangeline Lilly) as well as move the story on.

At the end of The Hobbit: An Unexpected Journey, Bilbo and the company of Dwarves had survived being attacked by Azog and the Wargs and were heading East to the kingdom of Erebor.

But trouble was awaiting them in the form of the sleeping dragon, Smaug, voiced by Sherlock star Benedict Cumberbatch, who was awakening from his slumber in the Lonely Mountain to take on any who would enter...

In The Desolation of Smaug, Bilbo and the Dwarves face yet more peril, as they continue their journey to the Misty Mountain. From a dangerous skin-changer, swarms of giant spiders in Mirkwood and being captured, the Company face threats they could never have imagined. However, it's when they find themselves at the Lonely Mountain that danger lurks - the dragon Smaug.... 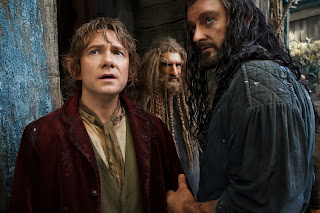 The second part of the trilogy brings the action - and then some.

It's a great pay-off when compared to the slightly more sedate pace of the first Hobbit movie, which saw some criticise Jackson for stretching the story as far as it could go, without actually doing anything.

But what you come to realise is just how much Jackson invested - and forced you to invest - in the journey of the Company of Dwarves as the Desolation of Smaug plays out. It begins with a prequel in Bree, on the edge of the shire (complete with a cameo from a certain director) and then doesn't let up until its final scenes leave the audience screaming for an immediate conclusion, as the threads dangle precariously in the wind.

As the film zips along, overcoming its narrative constraints (two sequences see the Dwarves captured by different factions, leading to fears of repetition), the world Peter Jackson, J RR Tolkein and Fran Walsh have created is expanded with a rich resonance that's hard to deny. New characters thrive in this second film, which brings tragedy and ominous consequences to the fore - despite occasionally stuffy dialogue being uttered by some (chiefly, Lee Pace's Elven King Thranduil).

See the pictures from the New Zealand premiere of The Hobbit: The Desolation of Smaug

Newcomers to the world include Evangeline Lilly's kickass feisty female elf Tauriel, who saves the day more than once, manages to give Orlando Bloom's Legolas a run for his money in the swashbuckling, arrow-firing stakes. There's a hint of something between her and Aiden Turner's Kili, which softens some of the harder edges of the years old conflict between the Elven race and the Dwarves, but Lilly manages to make every moment on screen count - even though she's essentially one third of a love triangle with Legolas and Kili. By the end, you'll wonder exactly how she was never part of the original book. But there's also tragedy in this film, with many characters suffering and lamenting a harsh fate in life; from Luke Evans' excellent Bard the Bowman to Richard Armitage's Thorin Oakenshield, even Martin Freeman's Bilbo Baggins are hardened and changed by their journey - and subtle performances all round do much to add to this fantastical tapestry.

Once again, Freeman is mightily impressive as Bilbo; this time around, the Baggins has got some baggage of his own as the weight of carrying the One Ring starts to change him, at once giving him courage and elsewhere leading to uncertainty; and Freeman doesn't shy away from letting the moods change on his face as well as indulging in some quite brilliant physical comedy. Unfortunately though, some of the company of dwarves are this time around sidelined from the film, with there barely being a moment to dwell on their interactions or characters; equally, the main characters merely propel the action rather than be fully affected by it; similarly, a side story thread with Gandalf is more about setting up a pay off in the third film, rather than providing a resolution during the film. It's a shame for a movie on its own, but if you start to think of these films as a series rather than individual stand-alone movies (which they really should be as number two in a trilogy), then you won't feel as short-changed. 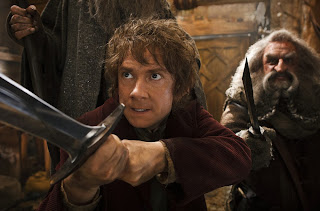 The set pieces in The Hobbit: The Desolation of Smaug are thrilling once again thanks to the stunning technology showcased by the 48 frames per second way of film-making; spiders will never seem the same again after a horrifying attack early on causes many a jolt from the seat - and Jackson's eye for intricate action sequences are highlighted in the giddy exciting escape sequence which sees the Dwarves flee the Elves in barrels; from quivering arrows to eye-popping moments, that one chase offers more thrills and danger than anything seen for a while. These sequences are technical marvels, effortlessly weaving the action without overloading the senses. Talking of overloading the senses though, praise must be heaped on the film's score, which is by turns, majestic when it needs to be and graceful in the quieter moments.

However, the finest part of the film comes nearly two hours in - and when it does, you realise just how much you've been waiting to see it - the dragon Smaug. Previously glimpsed in trailers and hinted at, this creature is a marvel of technology, a computer generated serpentine lizard that's as much a symbol of greed as it is a creature of cunning and deviousness. With Benedict Cumberbatch's rich tones adding a sinister and slimy texture to the character, the scenes with Bilbo trying to charm the dragon while finding his booty are rich with menace and ooze impressiveness.

The Hobbit: The Desolation of Smaug ends on a cliffhanger with the stakes raised incredibly high and Martin Freeman's Bilbo asking "What have we done?" and with you knowing there's at least another 12 month wait to find out. The simple answer though, Bilbo, is that you've created a fantasy film that once again soars above expectations, delivers a magical journey in spades and effortlessly commands and rewards your attention through its 161 minutes run time.