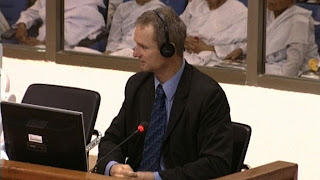 Annie Goldson's doco follows former Olympian Rob Hamill as he heads to Cambodia to get justice for his brother Kerry who was killed by the Khmer Rouge in 1978.

It premiered at the New Zealand International Film Festival last year - and to be honest, why it's taken so long to get a release for such an important film is a real headscratcher.

Needless to say, it's an emotionally wrenching and heartbreakingly honest piece as Rob opens up every step of the way in the process - and you can't help but feel appalled at what some have gone through at the hands of Pol Pot's regime.

There's humbling poignancy as Rob intones at one point: "I want to forgive but the more I hear,the harder I find it". You'd have to be hard hearted in the audience to disagree; it's a difficult journey in the face of such openness but the overwhelming feeling from this doco is one of pure inspiration.

Rob is a marvel even if his journey is so brutally repugnant and one you wouldn't wish on anyone-even your worst enemy. With a film like this, there is always the tendency to milk the emotions, pour on mawkish sentiment and stir the whole thing in an emotional goo which tugs at your heartstrings.

Thankfully, those involved have completely ignored such a temptation; as a result, Goldson's fashioned together a story which is left to breathe; it simply tells itself and this haunting, humbling piece is simply one of the best NZ films around. Historical footage adds much emotional weight to the tale and it can be difficult to flinch in the face of such horrors; but ultimately, a message of hope emerges and you'd be hard pressed not to be riveted and thoroughly moved by this heartbreakingly honest and compelling watch.