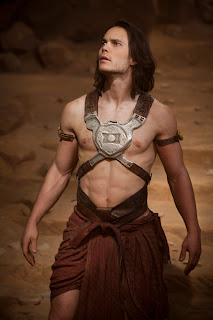 It's 100 years after the first appearance of John Carter in a series of books from Edgar Rice Burroughs- and I'm willing to bet most of you have never heard of him (or assume it's that bloke played by Noah Wyle in ER).
Taylor Kitsch (of Friday Night Lights fame) stars as John Carter, a Confederate captain, who's on a quest for gold back in the 1860s when we first meet him. But when he's cornered by Bryan Cranston's Civil War Captain and on the run, he finds himself transported to Mars (or Barsoom as the inhabitants call it) and thrust into the middle of a Civil war.

But not only that, Carter finds himself aligned initially with the Tharks, a 10 foot tall green skinned Martian race - and has to acclimatise fast.

However, it soon transpires there's a greater force at work here with the fighting being manipulated by a race of godlike beings, the Holy Therns, whose leader Matai Shang (the ever brilliant Mark Strong) is determined to stop at nothing to ensure their will is done...

What an odd curio this film is; there's little distinctive aside from the CGI - which I can recall as a stand out moment or definitive action sequence from the actual flick itself.

Let's start with some positives though; those definitely have to be thanks to the CGI.

The world of Barsoom (or Mars as we know it) is stunningly well put together in its scope and grandeur. I really believe that a civilisation on Mars would look like that in all its grainy, desolate, sand-ridden architecture. After Avatar's world, it's probably the most beautifully realised creation in terms of backgrounds ever to grace our screens. The effort that's gone in to make it so plausible and immersive is extremely commendable.

To a lesser degree, the Tharks are a success as well - their four armed digitally realised gangliness makes you think of greener versions of the Prawns from the brilliant District 9. And dragonfly style craft which are used to traverse the wide masses of the world are visually impressive as well.

Likewise an inflated faced, 6 legged dog creature which befriends Carter is a welcome dose of funny; and is clearly honed from the workings of a guy who's crossed Pixar studios floors.

But this is sort of where John Carter runs into a little bit of trouble - visually, hands down, it's an ambitiously scaled, wonderfully realised space epic; but narratively it's a little wanting and doesn't keep the mind satiated with what it's offered to the eyes. Sure, it's a wonderfully put together mash up of several genres including sci-fi, pulpy comics, Western, Cowboys and Aliens to name but a few, but it's not enough.

Confused and confusing, its story isn't everything it could be. And unfortunately, in terms of scale for its action, nothing truly stands out. Sure, there are set pieces which look good but they're instantly forgettable the moment they're over. In many ways, by being a forerunner as well (as in written over 100 years ago), it's clear the action sequences have been already done on the big screen. It's an unfortunate failing that it doesn't offer up anything which you may not have seen before - a chase on the dragonfly riders is reminscent of pod racing in Star Wars is just one example.

Of the main cast, Taylor Kitsch does okay in his first multiplex lead; he's never really outstanding and never imbues Carter with one stand out moment from within the action; Mark Strong is reliably good as the manipulative deity and Dafoe brings some welcome humour to Tars Tarkus as he befriends Carter. Some will go googly-eyed over the kickass temperament of Lynn Collins' Dejah Thoris who starts off strong willed and goes weak in Carter's thrall.

Unfortunately though as the denouement rolled around, I'm sorry to say I wasn't emotionally invested in either the characters or their fates - and I certainly wasn't on the edge of my seat hoping there will be an immediate return to Basoom (as the 11 books suggest there would be a wealth of material for).

Don't get me wrong - John Carter is not a bad film; it offers up a suitably sized scoop of silly blockbuster fun (despite the humour which is there at the beginning quickly trailing off in favour of sci-fi pomposity) for a few hours. It's just not perhaps the sci-fi epic it could have been - and it's certainly - and unfortunately -not quite the start to a franchise you'd be hoping for as you walk out of the cinema.