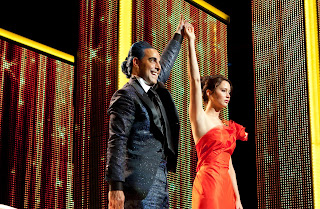 So, amid all the hype, the first part of Suzanne Collins' wildly successful young adult series The Hunger Games is unleashed in the cinema.
The film's set in a not too distant futuristic world known as Panem, which has risen from the ashes of a rebellion.

Those behind the rebellion have been defeated by the ruling classes and now live in run down districts outside of the main centre of Panem, The Capitol. But there's a heavy price for this rebellion as the powers that be hold the annual Hunger Games - where in a boy and a girl from each of the 12 Districts is chosen by ballot annually and must fight to the death in an arena with the world watching on.

Jennifer Lawrence stars as Katniss Everdeen, who lives in District 12. She's the carer for her widowed mother and younger sister, Prim, after their father was killed in an explosion down a mine. 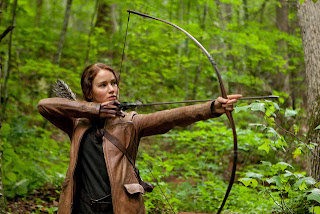 But when Prim is chosen as one of District 12's Tributes during the annual Reaping ballot, Katniss volunteers to take her place in the Games - and she's whisked into the Capitol along with baker's boy Peeta (Hutcherson) to train for the life and death ceremony...

The Hunger Games arrives with a hefty weight of expectation on its shoulders; from the fans, a desire to see their beloved books adapted well; from the studios, a chance to potentially launch a new franchise and for the non-fans, a chance to see what the hype is about and buy into the rest of the series.

And thankfully - mainly due in large part to Jennifer Lawrence and a lot of restrained direction from Ross, it's a success. 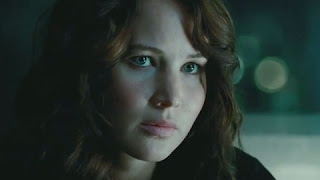 Lawrence's Katniss is a well rounded, focussed yet vulnerable character; a hunter gatherer whose desire to protect herself and her loved ones blinkers her to the world around her. Lawrence once again excels in a lead role and shows she can hold your attention for long swathes of the film. Through a subtly nuanced performance which internalises her emotions and showcases Katniss' stillness, Lawrence imbues the heroine with a series of instantly recongisable traits - fear and calculation mixed in together when she's hunting in the life or death situations and uncertainty when having to deal with emotions and new situations. Clearly once again, she demonstrates an acting talent beyond her years.
Go behind the scenes of The Hunger Games here!

Director Ross sets up the futuristic world around him well and you're easily taken into the not too distant future. Much of the lion's share of the success should go to the designers though; from District 12's grey squalor and oppressed vibe through to the opulence and brightly coloured decadence of the Capitol, the visuals and costumes are strikingly good, garishly gaudy and stunningly well realized. For the residents of the Capitol, think Johnny Depp's Mad Hatter in Tim Burton's Alice in Wonderland with less of the face paint and more purples and cyan colours.
Thanks also to a restrained direction from Ross, this is also a film where despite its very grim and dark story (kids hunting and killing their own) there's remarkably little blood shed and the majority of the violence happens off screen with swelling music indicating something bad has gone down. Sure you can argue it's a little sanitised but it's a directorial choice that gives the film a wider audience and does nothing to numb the horror of what's unfolding around.

Along with great supporting turns from Kravitz as Cinna, Katniss' stylist, Harrelson as Haymitch, a former winner of the Games, Tucci as a slick and slimy Master of Ceremonies and Banks as the District 12 escort, this is a film which impresses on many levels.


That said, it's not without its flaws; an over reliance on shaky cam at the start quickly outstays its welcome; there's confusion over what rules the sponsors (who have the chance to help the tributes inside the arena) must conform to other than offering a deus ex machina once in a while; and the film stumbles a little as its length kicks in and it awkwardly centres on a love angle between Peeta and Katniss, as well as trying to throw in a love triangle with Liam Hemsworth's Gale, one of Katniss' friends from back in the district. 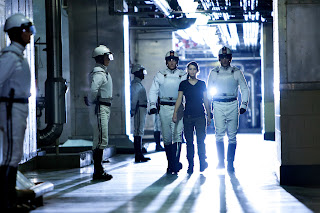 There's not quite the chemistry between Hutcherson and Lawrence that there needs to be to give the emotional conflict and fighting the edge but thankfully by refusing to paint the whole thing in a romantic hue, and keeping it realistic and gritty, you just about buy in.

There's also a little added commentary about whether you'd be happy to watch a spectacle such as what unfurls in the arena - and while the GameMakers are glimpsed, there's little about them, giving enough tantalising hints for any future adaptations.

Fans of the book will adore The Hunger Games - others should be suitably impressed by Lawrence's trail blazing turn - and while purists may claim it's been done before (Battle Royale anyone?), The Hunger Games is a brilliantly rousing mix of teen drama, futuristic sci fi and rebellion - which results in an extremely impressive film and a very confident start to the franchise.