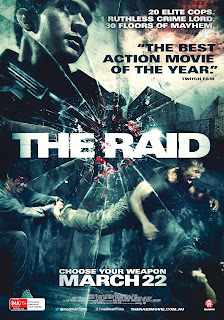 But quite frankly, nothing can prepare you for what you experience in this intense Indonesian martial arts action film.

Directed by Welshman Gareth Evans, The Raid stars Iko Uwais as Rama, a member of a SWAT team called in to help take down the crime lords living in a downtown Indonesian high rise building. Rama's about to become a dad and so has everything to fight for in this raid. Once inside though, the crime lords appear to have the upper hand and set the residents onto the SWAT team - and Rama can't prepare himself fully for what lies ahead - betrayals, shock and plenty of fighting....

And that's it for plot - because, quite simply, that takes second fiddle to some unbelievably violently intense and technically impressive fight sequences which pepper the entire film. Sure, there's a few lulls and quiet moments here and there between the action scenes - but man, oh man, what a stunningly good action film this is.

The Raid is unbelievably violent, utterly adrenaline soaked and will beat you into submission - in a good way.

The body count is incredibly high - people are gored and impaled by a door, shot thousands of times, taken out by machetes and even by fluorescent light tubes. The novelty factor of some of the kills is something audiences will lap up and you can't help but pump your fist in the air as the action escalates. 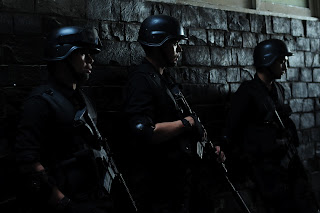 It's utterly watchable though thanks to spot on direction from Evans and there's something almost balletic about the way the lead up to the action is choreographed; with a slow brooding electronic soundtrack or beating drum, you're taken to the edge of your seat and then smashed in the face with the inevitable beat downs.

There's a real adrenaline rush to this intensely brutal flick - but the martial arts sequences when the guns are jettisoned and it's just hand-to-hand combat are simply stunning, sensationally choreographed and visually gobsmacking.

The Raid is heading for an American remake - and that's ok with those involved in it because it means there'll be money to make a foreign sequel; my advice though is to see it now while it's in its purest form and at its most thrilling.