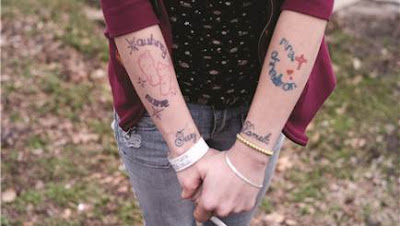 To say you could hear a pin drop during the Auckland screening of West of Memphis is a bit of an understatement.

I'm going to front now and admit, to my shame, that I've seen or heard nothing of this case prior to this year's festival, so perhaps I was in a better position than some to attend the screening, with its guests of Sir Peter Jackson and Damien Echols.

All I can say is that I was left floored by the power of the documentary and the story. And humbled by the guests who spent an hour or so after dealing with the issues and answering questions.

West of Memphis is the tale of 3 men, Damien Echols, Jason Baldwin and Jesse MisKelly Jnr who were convicted for the murder of 3 eight-year-old boys in Arkansas back in 1994. This piece then follows the fight to get their convictions overturned, them out of jail (and in Damien Echols' case off of death row) and the struggle to expose a system so corrupt and damaged.

When you explain it like that, it's easy to see how a film like this could pander to emotional manipulation, over-stating the facts and playing to people's worst fears as well as painting a whiter-than-white portrait of the victims.

But West of Memphis does nothing like that at all - it's a concise, compelling and horrifying tale of a miscarriage of justice which is so disgusting, you wonder how anyone could cope or live with its after effects. 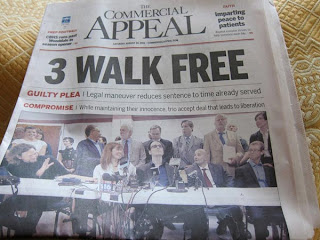 Full credit needs to go to director Amy Berg, who's clearly devoted years to investigating this case thoroughly and crafting together a piece which is rational, calm, measured and extremely powerful to behold. A murder such as this one had locals screaming Satanism and Berg doesn't shy away from showing the victims, the crime scene and emotionally draining scenes of one mother collapsing after she finds out her child is dead.

Yet none of this is ever exploitative or sensationalised- throwing together an extremely wide group of interview subjects from all sides of the debate is a smart move by the film-makers and swerves this doco away from ever being about championing one cause. Granted, Echols gets the lion's share of the story because this is the case Sir Peter and Fran Walsh became involved with to try and get him off of death row.

But, by pulling together the pieces of the puzzle and presenting a clear picture of who they believe committed the murders (and backing it up with no less than 7 experts!) and leaving the three convicted men to the relative background of the film rather than having copious shots of them protesting their innocence, what emerges is an emotional (and yet extremely rational) response which you couldn't have prepared yourself for.

Evidence is damning - and the finger of blame is pointed at a massively corrupt justice system and state of Arkansas while simultaneously exonerating the three men jailed for such a heinous crime.

They say a good documentary has you interested in the story as it plays out. But a great documentary sends you scurrying to find out more about the story, while leaving you with an overwhelming feeling and reaction.

West of Memphis is a great documentary - it left me shocked, appalled, humbled, extremely outraged and at the same time inspired. There's an overarching sense of injustice throughout its 145 minute running time (which incidentally flew by) and I have nothing short of utter admiration for Damien Echols, who at one points espouse the phrase: "This case is nothing out of the ordinary. Stuff like this happens all the time."

I defy you not to have some kind of response to this film (as you can tell from the above review, Berg manages to create a piece which affected me as I watched it unfurl)- West of Memphis is a powerfully masterful piece of filmmaking and story telling which pulls no punches and is in equal measures heartbreaking and humbling. It's also saddening to think that three lives have been lost with no-one caught and countless others overshadowed by the actions of someone who continues to live without any consequences (even though the film gives solid evidence as to who is to blame, the frustration they're not in jail is overwhelming.)

West of Memphis is a simply unmissable NZ Film Festival experience which showcases a talent at their absolute peak.

And if like me, you want to know more about this case, you can find out more about the ongoing fight to clear the West Memphis 3 on their website.