It's election time in America, and of course, once again, the satirists are keeping a keen eye on the Obama/Romney battle to see if there's any mileage and humour in their campaigns.

Enter into the fray, The Campaign movie, the latest contender in the political comedy landscape. 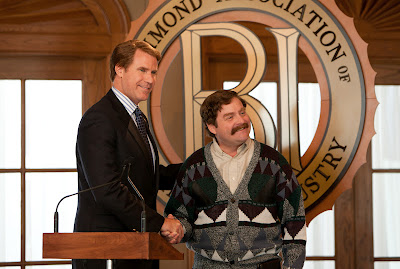 In North Carolina, Will Ferrell is unopposed candidate Cam Brady; he's been the incumbent for years and is going for a fifth term as congressman. But, when his lusty ways get the better of him and a misdialled smutty phone call ends up going to a Christian family, he starts slipping in the polls.

Sensing their influence over the district may be slipping with Brady faltering, two CEOs (Ackroyd and Lithgow) decide to put up rival candidate, Marty Huggins (a moustachioed Galifianakis) to shake up the race.

And that's when the politics get dirty - Huggins vows to run a clean campaign and Brady is determined to do whatever he can to stay in power... 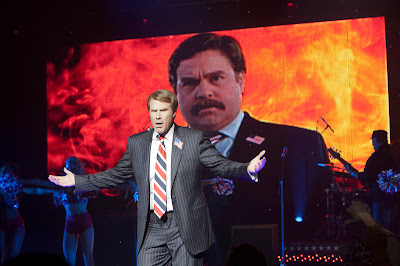 This is not a satirical comedy, aimed at the smarter side of politics; it's a hit and miss, scrappy affair which proffers up a few laughs here and there but no smart intelligent insights into American politics. (Mind you with Ferrell and Galifianakis on board, what would you really expect?)

Sure, there are some funny one-liners dusted throughout (some of which are unprintable here)as the campaigning gets personal and the tit for tat silliness escalates. There are also some amusing sequences (including what not to do with a baby and world famous dog) but most of the humour falls a little flat given the pedigree of who's involved. The uneven film starts off amusing and with its tongue sharply in its cheek but quickly runs out of steam like a campaign lacking in finance and a groundswell of support.

Ferrell manages to channel Bill Clinton as his senator tries to blunder his way back onto the campaign trail and Galifianakis channels a little bit of the overly camp, over-exuberance of Cam from Modern Family and the facial hair of Freddie Mercury in his blunderingly naive first outing as a senator. The pair are watchable enough but are infinitely better than the material which has been handed to them. It's almost as if the gags aren't enough to sustain a film but work well enough as punchlines to a series of sketches.

Ultimately though, The Campaign is merely a collection of amusing moments in a broad scatter-shot comedy which packs no sharp satire. You will laugh (occasionally) but you'll find the next gag is a long time coming as the story plays out over its short 85 minute run time.

Sadly, this campaign and its candidates don't get my vote..