Returning to work behind the camera for a third time after Gone Baby Gone and The Town, Ben Affleck's latest turns his attention to the tensions between America and Iran in 1979 and into 1980.

Affleck stars as Tony Mendez, a CIA agent with a floppy 70s haircut and slightly dodgy beard, who finds himself in the middle of a stand off between the two nations. When Islamic extremists storm the US Embassy in Tehran in 1979, 52 people are taken hostage. 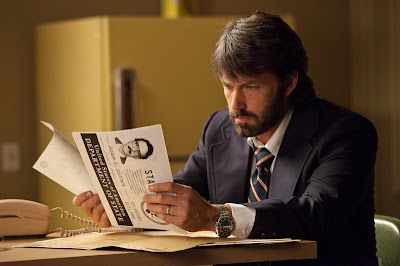 But a group of six made their way out of the Embassy and end up holed up with the Canadian ambassador (Garber) at his home - as tensions increased in the stand off, the CIA (led by Bryan Cranston's Jack O'Donnell) try to do whatever they can to get them out.

That's when Mendez comes up with a plan - pretend to be out in Iran, scouting to make a scifi film and smuggle the six out from under their noses.

With no other realistic options in front of them (or as the CIA describe it "the best bad plan we have"), the wheels are put in motion.... 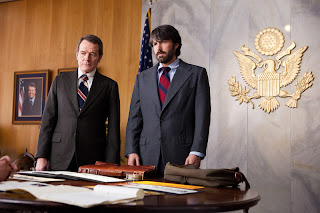 Argo is a thrilling and nimbly dextrous piece of film making from Affleck, who, once again, demonstrates he has the directing chops to bring a drama vividly to life.

From the spot on period decoration of the 1970s and styles through to the sci fi nods, it's a spot on tense drama which unwinds in front of you. Granted, it's quite earnest but serious in tone, with only hints of half smiles coming from Mendez as he sets about his mission. And the house hostages are equally as serious throughout as this involving story unfolds.

Thankfully, the dour tone is lifted by the film-makers Lester Siegel and John Chambers (Arkin and Goodman  respectively) who bring some much needed humour to the proceedings and who lighten the tone immensely as they deadpan and joke their way through setting up the studio for the fake film. One of the best lines comes from Chambers who intones that the "target audience will hate it - that's anyone with eyes." Equally, Siegel proclaims that if he's "going to do a fake movie, it's going to be a fake hit!" with such aplomb, you can't help but laugh. 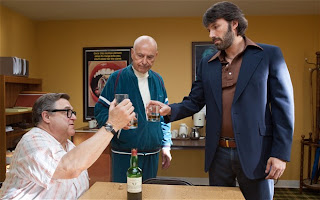 But that's what Affleck's got so right with this story - the mix of light and dark; he never appears to overplay the seriousness of the situation for anything other than the sake of the drama - and the end result is that you're captivated in your seat as the tension ratchets up towards the end and you wonder whether the operation will be successful or fail, resulting in everyone's death. It's a masterful piece of movie making which has got all of the small details right and a strong - if surprising - contender for one of the best films of the year.
I'd highly suspect that Argo is on the way to getting some recognition from the little gold man come 2013; it's a confident, respectful and utterly gripping piece of movie making from a director who's shaping up to be one of the generation's finest.
Rating: