Not since Mike Myers decided to throw the spotlight on what happens to the henchmen has there been a film which really looks at the consequences of being a bad guy.

Well, that was until Taken 2. 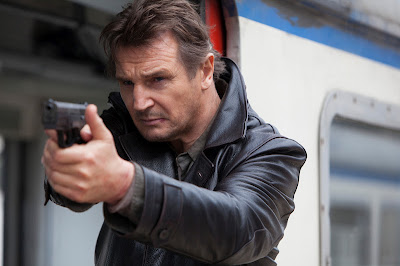 Having killed off the very bad people who kidnapped his daughter in the first Taken movie, Liam Neeson returns as retired CIA agent Bryan Mills.

Estranged from his wife Lenore (Janssen), Mills is taking security work abroad in Istanbul when he offers his ex and daughter Kim a chance to join him for the weekend. But the vacation's about to take a turn for the worst when the father of one of people Mills killed the first time around seeks revenge.

Soon, Mills and Lenore are kidnapped - and only his daughter Kim holds the key initially to saving them.....

Taken 2 is a bit of a major disappointment to be honest.

Lacking any of the originality and surprise of the first film, it's a formulaic and heartless mash up of action sequences and fight scenes which lack any real tension or suspense, while going through the action film hoops (a car chase here, a fistfight there). Whereas the first film had a fresh and novel premise, this one feels forced and to be honest, in places, a little ludicrous. (Bryan's daughter Kim heads off over rooves at one point, hurling grenades willy-nilly so that Neeson can track the explosions - she doesn't get shot for her troubles, leading me to wonder what kind of air policing is in place in Istanbul.) Perhaps, the most insane moment is the moment that Mills is taken at gunpoint, but yet has the time to make a long protracted phone call to his daughter, explaining what's going on. 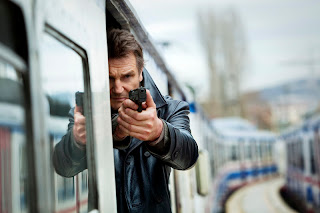 From its frenetic, jumpy camerawork which spits and starts during action sequences making it difficult to focus on anything for too long, before the focus heads elsewhere, to the choppy editing, this is a film which is ADD to say the least.

While Neeson has a reasonable time being a badass, he does in a rather dour manner and at the expense of any humour whatsoever - spending most of the time scowling and shooting. With his usual gruff, gravelly voice, he's clearly in action man mode but on auto-pilot as well.

Janssen and Grace have little else to do except whimper and offer sidekick support here and there, leading to plenty of feeling that it's simply going through the motions. Even the head bad guy, who grumbles about having revenge at the start of the film, poses less and less of a threat as Bryan Mills does little to boost  Eastern relations by taking out everyone who has a hint of an accent and stubble with a carefully placed shot here and there.

The problem with Taken 2 is that it's relatively bloodless for the amount of people being shot to pieces, it lacks any kind of real originality or tension and is sorely missing the inventiveness of the first Taken movie.

It seems highly likely given a $50 million US opening at the weekend that Taken 3 (Tak3n anyone?) is a distinct possibility but without any real threat appearing in this film, you'd kind of hope that unless the script ups the ante and makes it a bit more of a personal quest after this latest Mis-Taken attempt, (ie after the death of a family member), it's time to put this to rest.