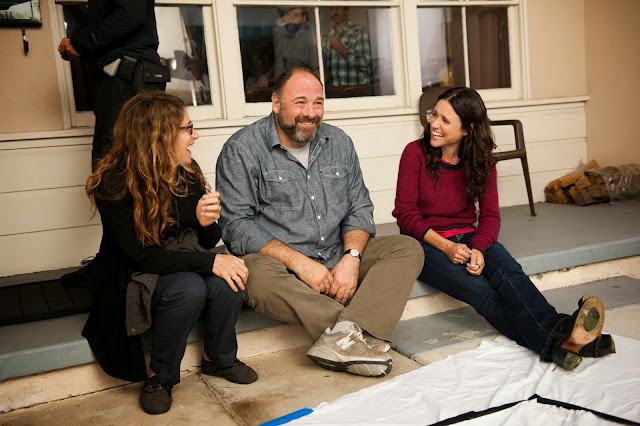 Tis a rare beast - a rom-com that feels fresh, doesn't rely on cliches and doesn't short change the characters and the audience.

It's an even rarer one that tackles an older set of protagonists, and does such a wonderful job of it. (Sure, we've had Hope Springs, but....)

Enough Said, from Walking and Talking director Nicole Holofcener, is the tale of divorced and single parent Eva (played with wonderful realism by VEEP and Seinfeld star Julia Louis-Dreyfus). Saddled with a massive masseuse table and moving from client to client, Eva is worried about her daughter's impending departure for college. 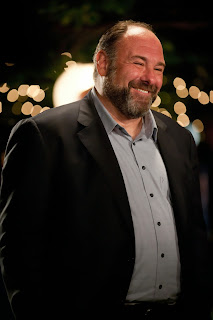 A chance meeting at a party throws her into the path of self-confessed slob Albert (James Gandolfini in his last full movie role), who's in a similar situation. Despite Eva's initial dismissal of Albert, she finds herself attracted to him and a romance blossoms.

But there's a stumble in this road to romance - one of Eva's clients is always bitching about her ex-husband and revealing the real reasons why she left . That sends Eva into a tailspin of doubt over Albert - however, there are bigger revelations ahead.

Enough Said is an absolute delight of a movie, an incisive and often hilarious insight into relationships later in life and an examination of how people's foibles can prove to be their undoing. Gently unassuming and charmingly honest, it's a film that deserves to stand on its own two feet rather than being mired in the sentiment of it being one of James Gandolfini's last before his untimely death.

Both Gandolfini and Louis-Dreyfus absolutely nail their roles, imbuing each with warmth and a raw honesty that's completely compelling and utterly entrancing. Gandolfini in particular displays a softer, more melancholy and self-deprecating side to his character that's so rarely been seen due to his more hard men roles like The Sopranos and his turn in Killing Them Softly. The screen crackles with their repartie and it never feels try hard or forced; ultimately their chemistry is disarming and enthralling to watch.

Louis-Dreyfus displays her usual touch of light comedy for the majority of the film and manages to fill her character with recognisable traits and touches. It helps that there's a well-observed script which dances over the material with ease, while skirting into the bittersweet territory of the flow and ebb of post marriage relationships / adult romances.

All in all, Enough Said deserves to be seen for more reasons than it's simply one of James Gandolfini's last films. It's an incisive, insightful, gently unassuming yet beautifully put together heartfelt adult romantic comedy which has a warmth running through its cinematic veins.