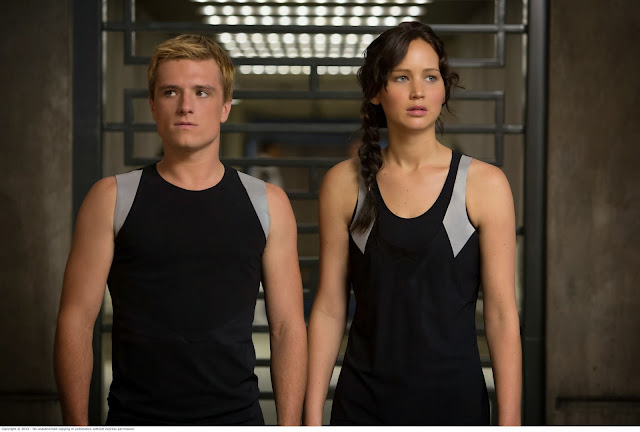 Following the massive critical and public success of the first part of The Hunger Games trilogy was never going to be an easy ask.

Suzanne Collins' dystopian take on a world where youngsters from Districts are forced to kill each other while the richer watch on was a stunningly good first film, that wrapped up social discord with an impressive heroine.

In the second film of The Hunger Games trilogy, Jennifer Lawrence returns as Katniss Everdeen, the winner of the 74th Hunger Games and champion of District 12. But it's not easy being the apple of the eye of the oppressed masses, and Everdeen's victory in the games, coupled with the way she's united the downtrodden, marks her out as a target as society teeters dangerously on the verge of collapse. Especially when the Districts of Panem begin to rebel against years of being beaten down.

Things take an even worse turn for Katniss when thanks to President Snow's interpretation of the rules of the Hunger Games, a new and more deadly version of events requires them to re-enter the arena with other previous winners and once again, fight to the death....

Greyer, grimmer, darker and even more dystopian than before, The Hunger Games: Catching Fire is an almost unrelentingly bleak second chapter of the series. Jennifer Lawrence is a more damaged Katniss, traumatised by her role as a killer in the arena, and troubled by ghosts from the past of both kills and colleagues. (A sly commentary on how Post Traumatic Stress Disorder affects those whom we send into war - no matter what their age.) So, it's bad enough that she has to live the games' victory over and over in the Victory Tour, and Lawrence brings a troubled touch to her performance; her very first shot sees her crouching ready to strike, with what could be sweat or a tear dripping down her face. Lawrence once again rises to the rich emotional beats of the story and the grit at the centre of this tale of the cost of independence and fanning the flame of revolution. 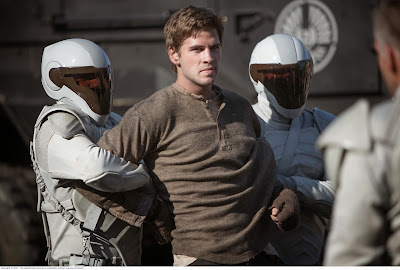 Having not read the source material, I did have some concerns this latest would be a rehash of the first in terms of dumping the tributes back into the arena and getting them to duke it out again. While to a degree, that would seem a fair criticism, there's much more build up and seething bubbling unrest to get through into the pre-amble before we're dropped gladiatorially into the arena. There's a slightly more expanded role (and pre-requisite shirtless scene) for Liam Hemsworth this time around in the Catching Fire movie, but once again Katniss and Gale's supposedly epic romance doesn't quite hit the mark, faltering in the face of the challenge from Josh Hutcherson's Peeta, who brings into play the pair's inter-dependence as well as the  growing existence of his own feelings toward Katniss.

Coupled with the fact that some of the other tributes are unfortunately so weakly sketched out that you care not when they fall, some of the emotional beats of the story don't hit the target with the strength of one of Everdeen's arrows. The film prefers to concentrate on the dynamics within Peeta, Katniss and their uneasy alliances - it's a move which just works but doesn't quite give you the massive emotional pull you need and were given in the first Hunger Games movie. Newcomers to the group - Jeffery Wright, Sam Clafin, Jena Malone and Phillip Seymour Hoffman - are given indication they will play greater roles in the finale, but provide solid starting appearances. It's more nature which is the danger this time around - both metaphorically and literally. 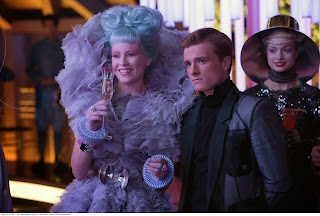 The Hunger Games: Catching Fire is more about the enemy within and the politics of life; be it President Snow's implied threats (masterfully seethed by Donald Sutherland), Effie's continued orchestrating of the pair's public appearances, Katniss' own demons (exemplified by Lawrence's restrained yet emotionally rich turn) or the politics of beating down the masses, and dealing with traumatic scars, all of which are bled out into an ominously brooding and at times, distinctly dark, teen blockbuster.

The look and feel of the second Hunger Games movie is one of desperation - even the lush jungle where the Tributes are forced to re-fight for their lives is a place scarred by combat and doesn't breathe new life into the broodingly oppressive and bleak tone of the film. Even the garish OTT costumes have been dialled down in tone and gone are the bright colours, swapped for duller colours, symbolising the troubled world around.

A few shots of the rather Messianic Everdeen are laid on heavily during the action (she's the saviour of the masses dontcha know), and the symbolism is so overt, it's hard to ignore. But the ending of The Hunger Games: Catching Fire leaves you feeling you've seen something special; while it doesn't expand the Panem mythology much further than the first and ends on a downbeat note heading into the final sprint, it's certainly exhilarating to watch it unfold. That's mainly thanks to Lawrence's complex portrayal of a heroine, morally troubled by her place in the world and fighting the pull between teen idealism and a growing awareness of the horrors of the real world around her.

It's another year to wait for the first part of the Hunger Games finale Mockingjay, but given Jennifer Lawrence has breathed so much life and vulnerability into Katniss Everdeen, it looks like the odds are forever in the favour of this franchise continuing to be so successful.