There's a delicious meta-irony in French director's Olivier Assayas' Clouds of Sils Maria, which won't be lost on many who follow the ins and outs of the Hollywood brigade.

Juliette Binoche plays actress Maria Enders, an actress who's invited to be part of a play that she starred in when she was 18 and which made her career. She's been haunted by this debut, and is awash with the insecurities playing such a role as this will afford her.

But as she heads to accept an award on behalf of the man who launched her, her whole life changes - and it's up to her and her PA, Val (played with sheer brilliance by Kristen Stewart) to negotiate the hand dealt to her.

It's the subtext which helps Clouds of Sil Maria to soar, as well as the classy performance of Juliette Binoche as Maria, whose life is being defined and eaten away by one role and the future ahead of her. 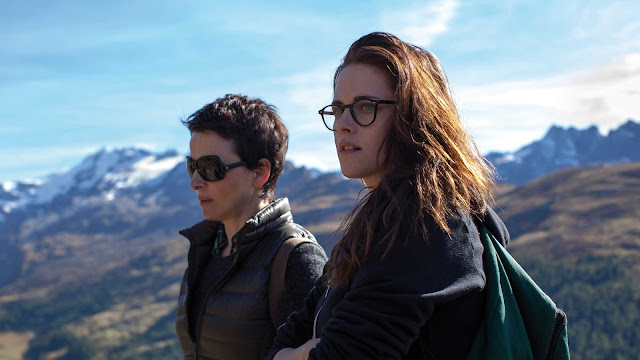 However, the real star of the piece is Kristen Stewart, who once again delivers a performance that's subtle, layered and naturalistic, displaying the acting promise she showed way back in the likes of The Cake Eaters.

Shorn of the insecurities that Bella afforded her (it's acting, people!) and revelling in meta-digs at stories that have werewolves in and avoiding paparazzi, there's a lot here to delve into and to recognise. However, that's not all the role brings to the page and Stewart admirably embodies the frailties and concerns with Val, as well as providing the rock that Maria needs.

It speaks volumes that the majority of this film is held solely by these two actresses and that it centres around their characters - the other major player in the piece is the scenery of the Swiss mountains and the Alps bring their own visage to the set-dressing.

As the lines between life on screen and life off are constantly blurred, Assayas does a brilliant job of assembling it all and keeping it within the boundaries of being subtly self-referential - unlike last year's Map To the Stars, where everyone was a nasty pastiche of Hollywood, Clouds of Sils Maria convinces us of two people in the machine, their frailties and strengths exposed for all to see - and in both Stewart's and Binoche's turns gives us characters to invest in and engage with.
Clouds of Sils Maria: NZFF Review