Jennifer Peedom's documentary on the Sherpas and Nepal is inevitably infused with a bittersweet touch, and is a scathing look at the unfolding industrial dispute on Everest.

Armed with a camera crew and with the intention of giving the Sherpas the moment to shine she felt they had been missing all these years, she couldn't have foreseen the tragic events that would brutally interrupt the 2014 climbing season - and after completing editing, the earthquake that struck almost exactly one year on. 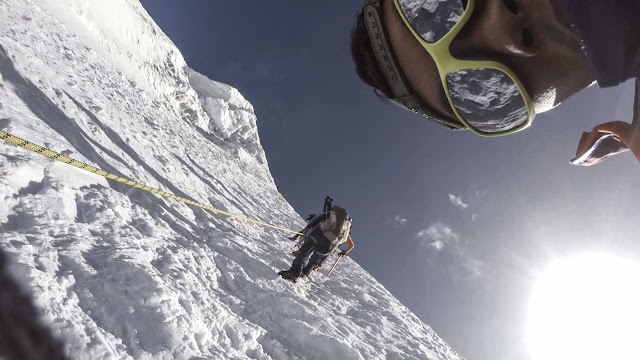 In 2013 the discord on the ground threatened to boil over with a fight brewing between the Sherpas and those climbing the mountain being the final straw. It was this in mind, and Peedom's perception that the Sherpa race has been ignored despite doing the majority of the work that set the documentary in motion.

But what emerges from Peedom's utterly thrilling and yet equally sickening piece is the bitter curelty of timing. Against a backdrop of whether the Sherpa are working too hard to capitalise on a season that grants them ten times the average wage and ensures their families have food, nature intervened on 18th April 2014, bringing an avalanche that killed 16 Sherpa and setting the debate into a chain of urgency that's as fragile as the snow hanging on the side.

Sherpa is never anything less than shocking as it exposes the widening gap between commercial venture and human life and there won't be many who don't fall squarely into the Sherpas' camp after the tragedy unfolds (that an American client claims terrorists have pushed them off the mountain when the Sherpa essentially strike fearing for their lives speaks volumes to their plight and the Western perception of entitlement).

Sherpa is formidable film-making, one whose ending will be changed in light of the 2015 Nepal Earthquake but one whose ethical and moral issues will resonate with many for years to come thanks to Peedom's unswerving eye and concise skill.

It's jaw-dropping stuff, and not always for the reason you'd expect.