The Incredibly Strange goes retro with this film, expanded from a concept submitted for the anthology The ABCs of Death.

Set in a post-apocalyptic world of 1997, it's the story of the Kid (Munro Chambers in a sweetly powerful role), a vulnerable yet capable loner in the wastelands who spends his time reading the comic book Turbo Raider and looking for bits and bobs to trade to get by. 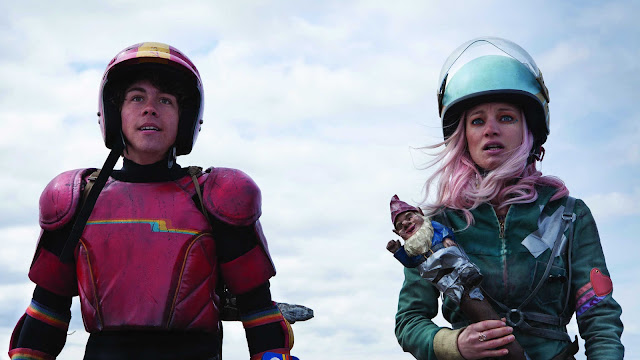 It's a world ruled by evil overlord Zeus (Michael Ironside, keeping it on the right side of malevolent and OTT), and one where water is scarce and a commodity worth dying for. When the Kid inadvertently finds Apple, a pink-haired, blue-eyed hyper annoying girl, she latches onto him and becomes his puppy-dog companion. A loner by nature, the Kid isn't best pleased by this, but takes her under his wing - a move that proves to be specially prescient given that BMX-mounted goons roam the wastelands - and soon the Kid and Apple are on a collision course with Zeus.

There's an endearing sweetness to Turbo Kid which is infectious.

Sure, it's got a fair amount of gore and splatter within, but beneath the blood, there's a huge beating heart and a tender love story bursting to get out.

It helps that the Kid is so eminently likeable, with a back-story that's admittedly predictable but the set-up of the film and the world around him is so accessible that this retro-thrill's innocence can't fail to win you over.

The design makes the most of the settings and the synth-heavy OST by Le Mathos is a real stand-out, perfectly encapsulating the kids action adventure series of Saturday mornings of yore. There are a few crowd-pleasing moments of retribution doled out to the bad guys and some inventively silly takes on the slice/dice mentality gel well and get the requisite laughs. 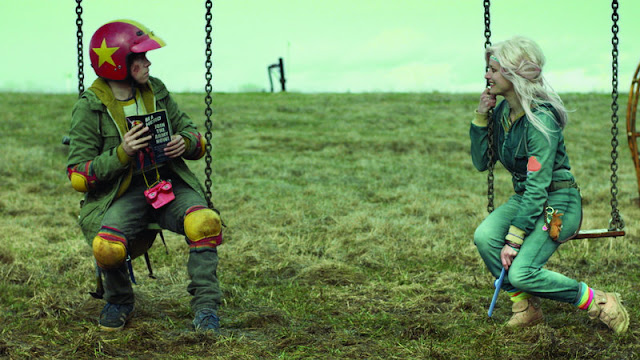 But it's the characters which make Turbo Kid work and elevate it through the tender pastiche of cheesiness and fun that surrounds it. Chambers works well as the Kid, bringing a new take on a guy in a red suit saving the world, Laurence Leboeuf's Apple is enthusiastic, yet never annoying, a smart savvy take on the buddy of the piece and Ironside brings the required menace as the bad guy, Zeus, but never overplays his hand, snarling when he needs to do and delivering his lines with bloody relish; but the real hero of the piece is a mute baddie and Zeus' sidekick, Skeletron.

Under just a metal mask, with a shock of hair and a buzzsaw weapon attachment, Edwin Wright's nervy and spiky energetic baddie is a cult icon in waiting, delivering the kills from the crossbars of the bike and giving the audience a villain to boo at but also to love. Underneath TURBO KID's splatter and gore lies a big beating heart that commands your genre love

Ultimately Turbo Kid is a retro-infused blast of nostalgia-tinged cinema; a good time box office piece, with a conclusion that hints at more options to explore this Mad Max with BMX bikes world - and thanks to its warmth and earnest heart, I'd be happy to visit again.
By Darren - July 19, 2015