There are 666 reasons to enjoy Deathgasm. 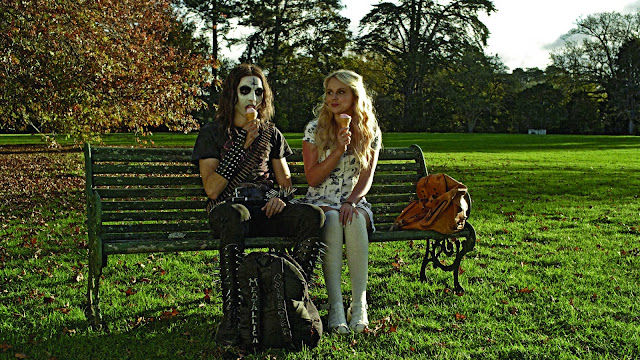 This bold opening statement has no basis in any kind of fact, but should give you some idea of how the winner of the Make My Horror Movie competition turned a Friday night into a real winner at the New Zealand International Film Festival.

It's the story of metalhead Brodie (a relatively tender Milo Cawthorne, playing alienated and real) who is shipped off to his Christian aunt and uncle in Greypoint, a small community in New Zealand. As if having a mother who ended up sectioned wasn't bad enough, Brodie finds this dead-end community isn't much better, thanks to bullies, school and having family who are "balls deep into Jesus."

Thankfully, his solitude is lightened by his love of metal and his friendship with fellow rocker Zakk. Along with two other outsiders, they form a band. But things go somewhat haywire when the group plays an unrecorded song from their idols, which they happen to find in an abandoned house with a pentagram in it.

That tune unleashes the imminent arrival of the apocalypse as everyone around becomes possessed by demons....can Brodie save the day?

With an eye for the gags and one-liners (perhaps, occasionally, it indulges itself a little too much), it's a riotous feast of sight gags, practical effects, sweetly earnest love-story, and betrayal. Basically, director Jason Lei Howden knows exactly what his audience wants - and delivers it in spades of gory laughs.

For a film that's put together on a budget, the writing is, for the most part, strong (I have some reservations about the slightly inconsistent nature and actions of one of the lead characters) with a searing eye for never losing sight of Brodie while clamouring to deliver the fun one-liners.

Devilishly good fun, demonically funny and satanically silly, the splatter-fest of Deathgasm represents another cult classic in the making.