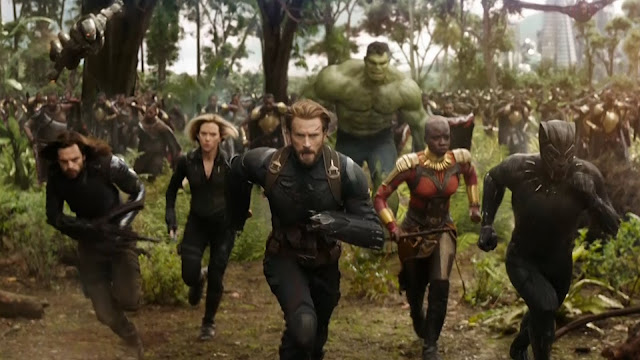 With a cast list as long as the page count of War and Peace, and capping a decade of Marvel films, it apparently has all led to this.

A despot of intergalactic infamy, and emerging from the cosmic shadows, Thanos is collecting six Infinity Stones, aka the McGuffins of the franchise which have been glimpsed before.

With the Avengers and their various allies determined to stop Thanos and his army waging war on reality, it looks like this is the battle to end all battles - the fate of Earth, the Avengers collective and existence itself has never been more uncertain.

After countless build ups and the growing feeling that the Marvel Cinematic Universe franchise has become stale with comedy elements undercutting any sense of drama, there's a real feeling that Avengers: Infinity War has to draw a line in the sand, and lay down some stakes for all involved.

For a large part, Avengers: Infinity War walks the tightrope of uncertainty for all the characters you've come to love (thanks to repeated over-exposure over the past decade) and imbues proceedings with an occasional sense of dread for some.

However, the writing keeps a lot of it emotionally grounded with themes of sacrifice and human selfishness and fallibility mingling and bubbling away throughout thanks to some briefly engaging interactions.

It's well executed as it bounces around the globe and into space, but there's definitely an over-riding feeling of weariness as the relentless CGI action kicks and smashes its way through (and certainly, a couple of scenes creak under the weight of being generated and rendered). 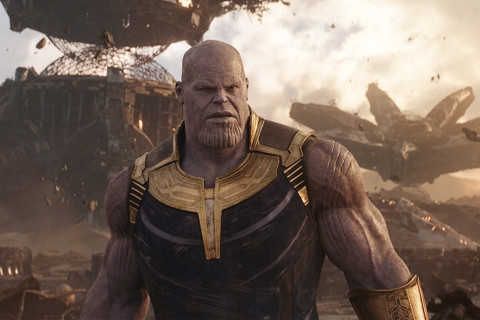 It tries to fights the curse of quite obvious writing in parts with lots of patently obvious signposting (all of which are too spoilery to discuss) and doesn't quite succeed at times, and there's definitely a feeling of set-up throughout.

As a sense of spectacle, Avengers: Infinity Wardoes deliver what the rabid Marvel fanboys want - a team up of epic proportions and scale and the Russo brothers deliver it mostly with considerable aplomb. Handling the unwieldly character roster with ease, most of the cast get a moment or some time in the spotlight (albeit with brevity and largely through a fight scene or two - and certainly Hulk's reunion with Black Widow is a massive disappointment), and it's a relative reward for the decade of set-up.

The Guardians provide the obligatory (and occasionally annoying) laughs as usual after entering to Rubberband Man, but teeter dangerously close to ripping the stakes' foundations from under proceedings with their flippancy. And disappointingly, Wakanda's involvement feels piecemeal, rote and written to provide a Phantom Menace fight redux sequence in the final act.

However, it's Brolin's motion capture Thanos who impresses most in Avengers: Infinity War.
Built up as a major threat in the preceding films, Thanos is a relatively complex and solid villain with the emotional depth and degrees of tragedy which give weight and heft to proceedings and parts of his motive. This is the villain the Marvel Cinematic Universe has needed and the threat that comes from him is as tangible as it is terrifying.

There is a feeling though throughout Avengers: Infinity War that death should have come knocking a bit more and certainly for some of the bigger names within the ensemble to truly hit the emotional mark, and while the oddly audacious but curiously emotion-free downbeat ending is to be lauded, it does reek of the usual tropes of the genre - ie fantasy deaths never really tend to stick, and slightly feels like a quick "this can be done over" in the next film - and certainly, there is a distinct lack of feeling permeating the screen.

Epic in popcorn entertainment and scale, but disappointingly limited in parts of its narrative, the at-times soapy and occasionally narratively uneven Avengers: Infinity War may feel like Marvel's trying to clear the table in lieu of the next phase, and setting up for the next one. (Though the time to be daring and dispatch with the post-credits sequence has been squandered with this one).

It possibly could have done with easing up a little here and there, and giving space to breathe, however, in terms of rewarding the fans of the franchise, Avengers: Infinity War certainly ups the game, even if it still doesn't really take the bold chances and daring gambles it could have easily afforded to after a decade and 18 films.
Avengers: Infinity War: Film Review