One of the big films of the year is a sci fi themed film based on a naval manoeuvres boardgame.

Yep, I can't believe I wrote that either.

From director Peter Berg, comes Battleship the film based on the boardgame we all played in our youth.

Taylor Kitsch stars as Alex Hopper, who starts the film as a kind of feckless waster and out with his brother Stone (Skarsgard) to celebrate his birthday; when in walks blonde bombshell Samatha (Decker). Smitten, Hopper ends up being tasered and arrested after breaking in to a convenience store to get some food to impress the girl....

Tired of his brother's mess ups, Stone, a Commanding officer in the Navy enlists his brother - cue a little while later and the pair are about to embark on naval war games. But Alex can't stay out of trouble and one altercation later with colleagues on the boat and he's facing being kicked out of the navy at the end of the games. 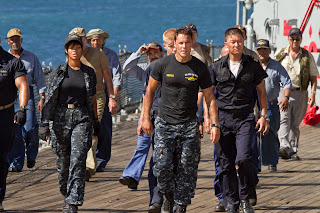 Trouble is the boss of the navy (Liam Neeson) also happens to be Samantha's dad - whom Alex needs to get permission from for marriage...

That's the least of his worries when an alien invasion force, known as the Regents, shows up in the middle of the games, having been contacted by a signal sent from Earth years ago....and they're not here to play, throwing up shields and keeping the world's armed forces out..

Soon, Earth's under threat and it's all down to the naval team, who's trapped within the shield to try and save the day....

It's hard to know exactly where to start with Battleship.

There's a scene in the trailer where Alexander Skarsgard's character is smacked across the face with a soundwave emitted from the bad guys and staggers around stunned, bloodied and lost.

That's something a little similar to how I felt during parts of Battleship as the loud, brash, FX heavy and slightly cheesy, occasionally tongue in cheek flick unrolled one action scene after another. But yet, there are moments where Berg pays such homage and respect to America's navy, it's hard to fault his intentions amid this testosterone FX fuelled rampage through blockbuster territory.

It's a gung ho piece - complete with patriotism aplenty as we take in the all American way; from a football game between Japan and American navy sides to a shot of a kid turning around sucking down a Subway drink (sponsorship anyone?) this is the kind of film which salutes the very best of America and gives it a moment on the screen.

And yet, when Berg takes a quieter approach to matters, he's to be saluted. He shows the full cost of being involved in wars and conflicts by giving Brooklyn Decker a job as a physioin an army rehab centre - and then whirls the camera around the various people afflicted by it all. (Well, right before pairing her off with an amputee who's lost his sense of worth having lost both his legs and sending them off on a quest).

Plus the sequence when the old timers are rolled out onto the final Battleship to help take down the bad guys, is the kind of thing you should really stand and salute in the cinema. All set to a raucously loud AC/DC/ generic heavy rock soundtrack, you can pretty much tell what you're gonna get with this side order of cheese.

If you want to see a film where an amputee goes mano a mano with an alien and smacks him about, then Battleship is the film for you. Hell, even Peter Berg wants to get in on the action too, giving himself a little cameo in among the throwaway humorous one liners scattered throughout. That is in amongst the cliches and such dialogue as "I gotta bad feeling about this - a like we're gonna need a new planet bad feeling"... 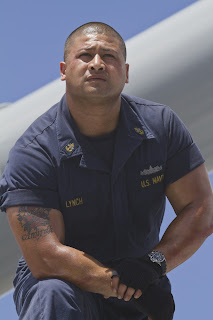 But there are some plus points in amongst this OTT in your face flick- Taylor Kitsch does a great job of helming this ship (much better than his leading man in John Carter) and shows he's got what it takes to lead a major blockbuster piece; Liam Neeson is sidelined with hardly any on screen time which is a major mistake; in her acting debut, Rihanna is all hissing kitten and hardly needing to do much acting as a serving grunt and our very own Tongan John Tui is majorly impressive as the ship's engineer, bringing a bit of much needed Kiwi credibility to this. (I'm hoping this is a start of a top notch career for him in the blockbuster action genre - because he's very good in this - and shows he's got the potential for a major blockbuster career).

The alien spacecraft are well done and the CGI works smoothly; less successful perhaps are the marauding aliens which, when stripped of their helmets and full on HALO style battle gear, resemble nothing more than a squat potato with porcupine quills stuck into their chin.

The nods to the Battleship game are quite cool and respectful if you know the HASBRO game - from the enemy missiles thrown out from the ships which resemble the pieces you'd put in the old boardgame to the quite clever way that the filmmakers bring the old concept of the grid game to the screen is to be commended as well.

At the end of the day, I think you know what to expect with a film like this - one that's occasionally a little more than Transformers in the water - it's a brash, ballsy, blockbuster sized slice of patriotic cheese which pummels your mind and eyeballs into submission as it rolls out over its two hours of pure brain at the door big dumb fun.