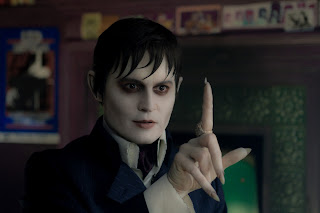 The soapy series ran from 1966 to 1971 and was a gothic soap opera around the Collins family, whose head is a 200 year old vampire. Taking in werewolves, vampires, time travel, parallel worlds and ghosts, it was a curio back then.

And really, when you consider its pedigree, it should come as no surprise that Tim Burton and Johnny Depp should reteam for an eighth time to take it on.

The film begins in Liverpool in 1760 with the Collins family relocating to North America to make their name. With riches, they set up Collinsport and Barnabas (Depp) grows up abroad. But when he scorns the love of a witch, Angelique Bouchard (Green) for another, he's cursed, turned into a vampire and buried for 200 years underground.

Nearly 200 years later, Barnabas is accidentally awoken and returns to Collinsport to find the once great mansion in ruin, inhabited by relatives who don't care about the family name and finds the family fishing business is all but destroyed by competition from Angelique Bouchard's rival company.

So Collins sets about trying to recapture his former glory - as well as trying to win the heart of Victoria Winters (Heathcote) who's the spitting image of Barnabas' first true love. 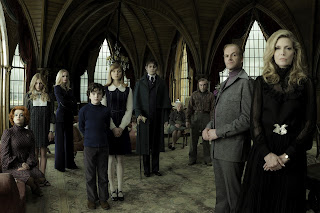 Dark Shadows is an odd curio; it's an absolutely natural fit for the Tim Burton and Johnny Depp partnership, bathed as it is in off kilter moments and Gothic sensibilities. From its darkly chilling opening, it screams Burton's work - from the overly brightened colours to the pale washed out landscapes, it's clearly a horror joint with a backdrop of family tragedy and quirky misfits.

And yet, it's lashed with so much campy comedy that it's never really one thing or the other.

It's once again Johnny Depp's performance which keeps this going; his culture shock comedy at being revived some 200 years later is a blast, referencing the best of the 1970s and also Nosferatu as he skulks around in the shadows as the music of the 70s blasts from the soundtrack. There's plenty of tittering to be had at his facials and carefully pronounced acting which renders Collins a little stiff and starched.

As for the rest of the cast, well, I think to be honest, there's rather a few too many on screen, leading to it feeling like some are underdeveloped (Jonny Lee Miller as a thief being one) or simply there for effect rather than storytelling. Chloe Grace Moretz does well as the daughter with a secret, Pfeiffer is fairly stiff as the matriarch of the mansion, Bonham Carter is simply an orange wig as the family psychologist who's got hidden motives, and Eva Green is more toothy than seductive as the vindictive witch with a chip on her shoulder.

It's a shame because the creepy, spooky atmosphere, visuals and feeling Burton's brought to the screen are brilliant; it's just that it feels a little undercooked and unsure of what exactly it wants to be. There's not quite enough comedy to keep you laughing all the time (and most of the laughs are gentle ones rather than raucous belly laughs) and the drama isn't quite strong enough to pull it all through. 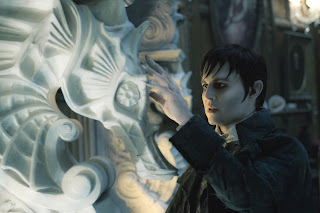 And the finale is pure Burton - a heady mix of Beetlejuice meets Death Becomes Her (as well as an hilarious riffing around the phrase "You make me sick").

All in all, while Dark Shadows is true to its roots and ends on the prospect of a sequel, it'll really need to get more of a definitive mix of campy comedy/ horror and Gothic for any future outings. It's not quite Addams Family sensibilities and humour either, but you can mark this one up as a slightly undercooked, overlong, curio and oddity which doesn't quite hit the mark.