In Men in Black 3, Agent J (Will Smith) and Agent K (Tommy Lee Jones) return as they fight Boris The Animal (Flight of the Conchords' Jemaine Clement) 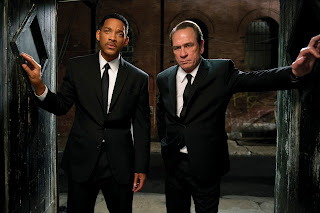 Agent J (Will Smith) and Agent K (Tommy Lee Jones) return in the third outing of this series in which they’re dudes in black suits protecting the earth from the scum of the universe.

This time around, when angry baddie Boris The Animal (played as badass biker by our very own Jemaine Clement) busts out of the moon prison Agent K put him in years ago back in 1969, he’s only got revenge on his mind.

So, he decides, with a bit of techno trickery pokery to head back in time and erase K from time to ensure that he’s never caught in the first place…

But when K simply vanishes, (somehow) Will Smith’s wise talking J is the only one who remembers him and he also heads back to 1969 to ensure history’s not changed….

However, it’s not just Boris the Animal waiting for him, but a younger K, played by Josh Brolin.

Men In Black 3 comes a long time after the sequel (a decade on from 2002) and with it, a feeling that something really needed to be shaken up in the partnership between Smith and Jones. 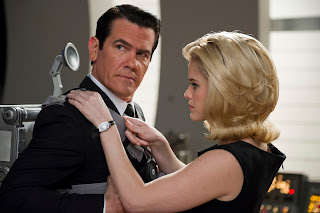 Sadly, it appears, that magic ingredient was sidelining Tommy Lee Jones’ curmudgeonly emotionless K – and replacing him with a younger, livelier version played with utter brilliance by Josh Brolin who really does make you feel that he’s the younger version of the character thanks to a spot on impression.

It also means that Will Smith is prone to going back to his motor mouth wise talking sassy dude because at the start he’s a bit of a sad sack moping about as the partnership appears to flounder. He works well with Josh Brolin and by giving K a bit more life, the spark is revitalised between the duo.

Jemaine Clement is good as Boris; it’s a step away from his comedy acting. Though under layers and layers of prosthetics, he spends most of the movie glowering and fighting but to be honest, it’s a good solid performance in a relatively thankless role and really does show this Conchord has wings. Equally worthy of mention, is Rick Baker’s monster menagerie which is created for the start of the film – the creature work is stunningly good and realistic and it’s definitely missed from the middle of the film onwards.

A twist at the end of the film hints at a poignancy and resonance between J and K’s relationship and may be a nice pay off for fans of the genre.

But it’s not without its flaws – Emma Thompson and Alice Eve are woefully underused as Agent O, the head of the MIB agency and hardly have any major screen time, rendering any moments they’re in utterly pointless. 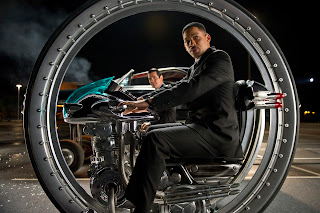 And I have to say, one of the biggest flaws of Men In Black 3 is that it’s not peppered with a lot of humour (ironic, given that the three main leads are the first three letters of JOKE) and it desperately needs some of that throughout.

That’s not to say it’s overly po-faced, merely that an injection of some smart humour would have given the film a bit of much needed zing throughout – granted, there’s a few one liners here and there which work but more would have been welcome.

All in all, Men in Black 3 isn’t a bad and unwatchable film, it’s a reasonable capper to the trilogy but if they’re to plough forward with this franchise, there really does need to be something more added. As a light, frothy piece of 90 minute entertainment, it just about makes it – but as a blockbuster promising action and comedy, it’s sadly left wanting.