Following on from the success of the 2009 reboot of the Star Trek series, it was inevitable there would be a sequel. And it's a much welcome decision if the meltdown on the internet over the plot and subtleties of this latest is anything to go by. 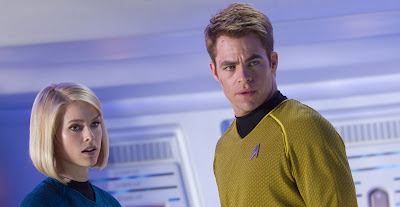 Chris Pine once again returns as the younger version of Captain Kirk, who, this time around, finds his world is shattered with the arrival of John Harrison (a villainous and cold Benedict Cumberbatch), a terrorist whose actions rock the very core of Star Fleet.

But when Kirk is despatched to bring in the war criminal, the stakes are higher than ever before...

Even if you hadn't been expecting the last Star Trek movie to be thrilling and exciting, this new film never lets those expectations drop - and in fact, it completely exceeds them.

Even with the advent of the internet, there has never been so much rabid fan assessment of every detail, each single trailer, every single nuance of dialogue and story hints. Trust me, it's best to go into this completely cold and unspoiled.

Conversely, director JJ Abrams and his team are to be commended for pulling together a film which totally services the incessant whimperings of the fan base through moments which acknowledge its past without ever sacrificing the broader appeal which the first film carefully traversed and successfully paid homage to.

Kirk and his crew are utterly engaging once again as the action piles up and it's Chris Pine, whose heroic central performance deserves the most commendation. It's a stunning turn once again by an amazing Pine who brings a maturity to his hot headed and brash Enterprise captain.

Not only is there action a-plenty in this latest Star Trek movie, there's just so much of it. The film begins at a breakneck pace with Kirk and McCoy racing through the undergrowth of an alien world, but after two hours, just when you think you can't cope with any more, JJ Abrams throws in a final showdown piece which takes your breath away as the parallels to the contemporary politics of war reach an epic conclusion. 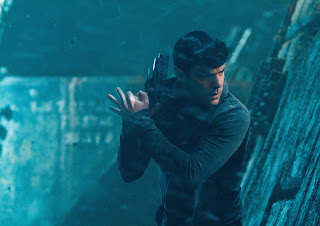 But it's also in the quieter moments that Abrams and co truly deliver in this new Star Trek movie - a menacing and magnificent Benedict Cumberbatch exudes villainy and clever cerebral cunning as John Harrison, whose single minded ruthlessness signals a real threat to StarFleet; humour from Simon Pegg as Scotty and moments of laughter from Karl Urban's brilliant McCoy blend nicely into the mix; and squabbles between Zoe Saldana's Uhura and Zachary Quinto's Spock add layers of humanity to the story as it plays out. Even though Chekov and Sulu are a little sidelined, nods to pivotal moments or characters from the show's run will spark nostalgia with fans and will please, but not at the expense of alienating the newer generation. It's a vulnerable Kirk who's growing up, maturing as he makes the journey and taking some responsibility for the choices he's made, and Chris Pine conveys all of this excellently. As an added bonus, the bromance between Kirk and Spock is warm, welcoming and utterly relatable as well as funny in places. Quinto and Pine have captured the essence of the original characters and made them their own. 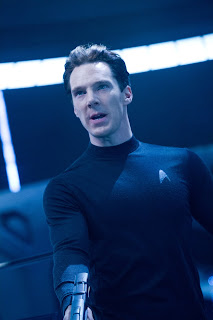 There's so much to love with Star Trek Into Darkness.

From the unfolding mystery and intrigue to the set pieces which soar as the action shows no sign of abating and is cranked up to Warp Factor 11; it's packed full of surprises and twists plus there's an extremely subtle tweaking and subversion of what you might expect.

The end result is mesmerizing - a perfect blend of blockbuster thrills, spills and excitement as this latest boldly goes into 3D, which adds depth to the Enterprise and vastness to the space scenes - as a bigger, bolder and more exciting piece than its predecessor, it's an utterly, unashamedly enthralling ride.

Easily one of the films of the year without a shadow of a doubt.