Last night, I was asked if I'd be interested in either goose-stepping out of the SkyCity Theatre or participating in a group sex session on the stage of the same venue. 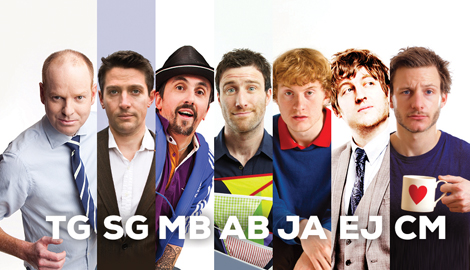 Before you start to worry about my character, let me just say that this was the start of the New Zealand International Comedy Festival in Auckland, which fully gets into gear this weekend before running till the end of May.

The 5 Star Comedy Preview was the opening act before the Gala tonight to kick things off, and credit must be given to Scott Blanks, of the Classic Comedy Club, for bringing in a relative wealth of new talent to show off to an at times, as ever, reticent to get involved audience. (Seriously, if you're off to a comedy show, you are there to laugh and be involved - don't hold back as the acts deserve the instant feedback.)

MCing the event was the UK's Stuart Goldsmith, an affable and friendly host, whose countenance belies the depths of his wit and potentially, depravity. Confessing that he, according to his own words, is "dirtier than this face would suggest" and who has the outward appearance of 70% Wiggle. Goldsmith, who's here as part of the Big Show, got the audience onside from the start by tackling such topics as Auckland traffic lights, relationships, and an ability to riff on whatever takes his fancy, he's clearly one to watch at this year's shows.

Six other acts took to the stage including the UK's Andrew Bird whose brief set started off a little uncertainly with some talk of measuring in cooking, which perplexed the audience as to where he might be going. But, as ever with a strong comedian, what seems like the odd soon becomes the perfect set up for some perfectly well timed punchlines. Another set piece detailing how being a house husband led to a minor polite home invasion was delivered perfectly.

Welsh comedian Elis James, who outwardly looked like any member of the 90s Britpop scene shambled out  with a laid back energy vibe that took in such diverse material as a brief lecture on the meanings of words in Welsh, and other understated material such as a travel confusion - "I'm a local lad and it's good to be home". Dry, James is already a rising star in the UK and is being tipped as one to watch - it's easy to see why. What appears to be a comedian getting distracted is actually an extremely clever set up to get us to the end.

Aussie Tom Gleeson was potentially the star of the night. Opening with riffs on how he's joined the techno age and been taken in by Apple products before gleefully (and perhaps truthfully) suggesting what direction Steve Jobs' company could end up taking, he was on fire from the very beginning. A rambling, raucous and deeply amusing piece about a massage finished his all too brief time on stage. I think, based on 10 minutes in this show, you'd be a fool to miss his solo outing.

Continuing the UK invasion, Chris Martin (no, not that one) took to the stage to open the second half with considerable aplomb and plenty of gusto. Riffing on observations of what Auckland really doesn't need more of and taking in a fear of dogs, he exuded a stage presence which was highly contagious. A heckle telling him New Zealand had no squirrels presented him with the chance to break free of some prepared material and showed how he's clearly a talent with a devilishly quick mind and a comically eloquent turn of phrase.

Englishman James Acaster, under a mop of curly blonde hair and a Frank Spenceresque awkwardness, presented another low energy vibe but demonstrated a subtly conjoined approach to gags and weird whimsy as he took us on unexpected tangents of surreality. A riff on mariachi music went on a little too long but showed a smart deftness of thinking; Acaster may be an interesting watch at the festival and you'd be wrong to dismiss him simply because of his ultra laid-back attitude.

Concluding the show was UK comic and former teacher Markus Birdman, whose physical comedy and clear ability to shock from the get-go marks him out as someone to watch. Taking on euphemisms in teachers' reports on pupils, a mocking of the fact the British are everywhere and relationships, Birdman was a veritable hit. When talking of his split with his partner of 14 years, he was quick to pour a degree of scorn on the audience's sympathy with a very cleverly acerbic one-liner ("Thanks for your sympathy, but you've got no idea what happened") making him perhaps the most unpredictable of the night.

All in all, the fresh talent to these shores represents a real step up in terms of new material and new acts. With plenty on offer over the coming weeks, you may be hard pressed to select from the best, but you certainly won't have any problems finding something to enjoy.
The 5 Star Comedy Preview Review