There's an interesting dichotomy at the heart of C'Mon C'Mon, Mike Mills' paean to childhoods lost, and futures hoped for.

Joaquin Phoenix plays Johnny, an interviewer who trudges around the country talking to kids about their hopes and dreams for the future, while trying to reconcile his own past fractious relationship with his sister, Viv (Gaby Hoffmann). 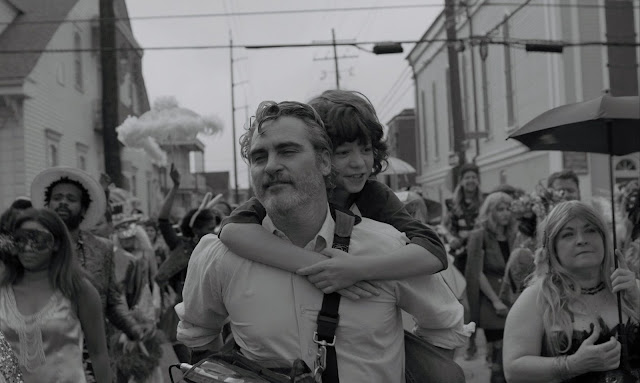 When Viv has to leave to take care of her son's father's mental issues, Johnny naively offers to take her kid Jesse (Woody Norman) under his wing, believing it will be easy to do. However, as Johnny reconnects with his sister over their difficult relationship with their once-ailing mother, he finds Jesse challenging him at every turn, forcing a re-examination of his own beliefs.

Occasionally meandering, and a little overlong for nothing more than a 3-hander film, C'Mon C'Mon, shot in its monochrome colour scheme, is a film that may try your patience.

While Phoenix is mellow, and Norman is prodigious (rightly Oscar-nominated), the vibe of the film takes a little while to settle in as it builds its almost elegaic and fragile atmosphere.

There's nothing new in a main character being forced to revaluate themselves at the hands of a kid, but Mike Mills takes time to slowly stoke the quietly burning fires among the self-analysis of what life is about, and the ups and downs of parenting.

With its "nobody knows what they're doing they just have to keep doing it" ethos, the film soars when it uses real life interviews with children who reveal the fragility of their outlook in the 21st Century. Children in New Orleans provide more fascinating insights than the normal city-based ones interviewed, but none lack the validity of their hopes and dreams.

It may be an extended babysitting film, and a film about listening to all around you as well as yourself, but C'Mon C'Mon never wallows in preachiness, even as a degree of pomposity creeps in when Johnny starts interviewing himself and recording his feelings. Thankfully, the relaxed Phoenix can sell that side of the narrative with ease, removing subtly any claims of pretentiousness.

However, an over-reliance on voiceover and flashbacks slows the already glacial pace, and pushes C'Mon C'Mon dangerously close toward overindulgence territory from the Beginners and 20th Century Woman director.

Ultimately, C'Mon C'Mon is saved by a delicate Phoenix and a precocious outstanding new child talent - it may not be to everyone's taste, but the reflective vibe is a soothing balm for mentally fragile times.