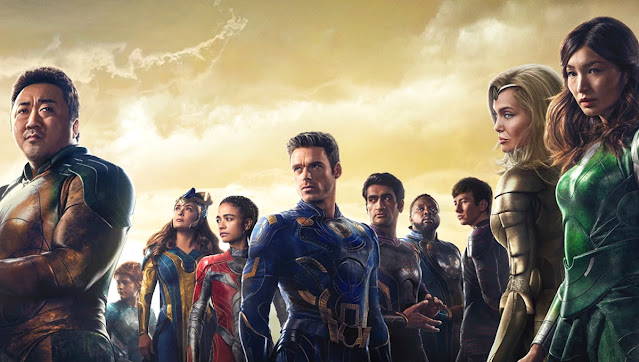 A more dour and muted affair with a side-serving of fight scenes and CGI carnage, Eternals is the story of the Eternals, a group of gods who have lived among humankind for millennia. But when their head Ajak (Hayek, regal) is killed by their enemy the Deviants, the group faces a return of a threat they'd thought vanquished centuries ago.
It's easy to dismiss the Marvel formula and the way the machine churns content out of the system, and to dismiss it when they try something new. In truth, Eternals is not the greatest to come from the Marvel stable, but its desire to push something more intimate into the MCU is to be applauded.
It's just unfortunately that the film takes a while to get anywhere, and its characters are less than exemplary, with them mainly being of a too po-faced and serious nature to fully over engage with.
There's a great mix of diversity in the cast, and Zhao handles the different stories with sensitivity from Jolie's Thena's mental illness to Chan's Sersi and her conflict - but it's not quite engaging enough, despite the bum-numbing 2hr 37 minutes run time.
A lot of the usual CGI fight scenes pepper most of Eternals, as in truth, there's little else to do outside of large amounts of exposition and hypothetical gnashing of teeth. It's sad that Eternals becomes just another Marvel beast to feed and falls into the trap, especially as Zhao's worked so hard early on to make things feel different.
Ultimately, Eternals is a film about potential, but one that ironically never reaches its own.
Eternals is now screening on Disney+
By Darren - May 03, 2022