A charity film festival is being launched in New Zealand to help those suffering in the wake of Russia's war on Ukraine.
The Ukrainian Film Festival is starting off at Auckland's Victoria Theatre in Devonport, before hopefully expanding nationwide. $20 from every $30 ticket sold will go to charity.  The charities are - The Ukraine Humanitarian Fund, Voices of Children, Ukrainian Women' Guard and Support for Ukrainian filmmakers 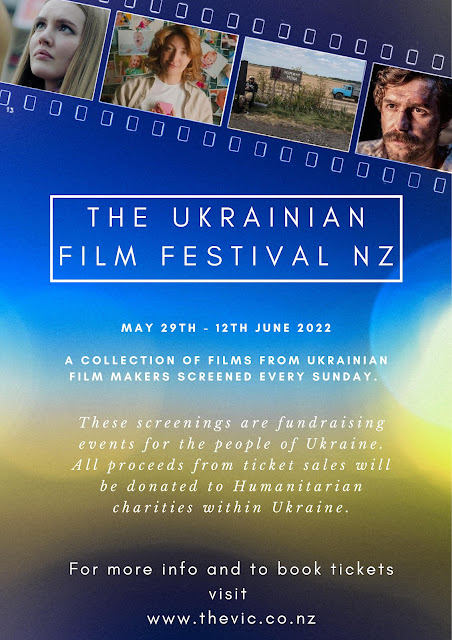 Over three Sundays between May 29 to June 12, the iconic Vic Theatre in Auckland’s Devonport will host three special screenings of Ukrainian cinema: two feature films and a collection of contemporary shorts.
Here's what's playing the upcoming Ukrainian Film Festival.
BAD ROADS (SCREENING AS PART OF THE UFF NZ ON MAY 29, 2022)
Four short stories are set along the roads of Donbas, Ukraine during the war. There are no safe spaces and no one can make sense of just what is going on. Even as they are trapped in the chaos, some manage to wield authority over others.
But in this world, where tomorrow may never come, not everyone is defenceless and miserable - and even the most innocent victims may have their turn at taking charge.
The film premiered at the 35th Venice International Critics Week where it screened in competition.
SHORT FILM COLLECTION (SCREENING AS PART OF THE UFF NZ ON JUNE 5, 2022)
2 LINES/2 LIVES
This is a story about a young creative family. The family is one, but the goals of the spouses are different. She wants a child, and he dreams of an acting career. How far are they willing to go to reach their goals? (18 mins)
SAD PORTRAITS
A love triangle between a cashier and two security guards of a small supermarket in a provincial town. (30 mins)
Winner of the main prize at I-st Khmelnytskyi Film Festival (Khmelnytskyi, Ukraine, 2021).
WATER
Nazar lives his small life in a big city, trying to flee from his haunting past. Will he ever overcome his shadows? Will he ever dare to love and make another person happy?
(30 mins)
WE’LL NEVER GET LOST TOGETHER AGAIN
27 y.o. Sasha missed his flight. He has to spend the whole day in the mysterious southern city, without cash, mobile phone, wi-fi and other benefits of civilization, accompanied by young Sashka, an eccentric and beautiful girl. (35 mins)
THE INGLORIOUS SERFS (SCREENING AS PART OF THE UFF NZ ON JUNE 12, 2022)
What if Taras Shevchenko (aka the “serf who founded a nation”) put down his pen and took a samurai sword into his hands?
By Darren - May 09, 2022