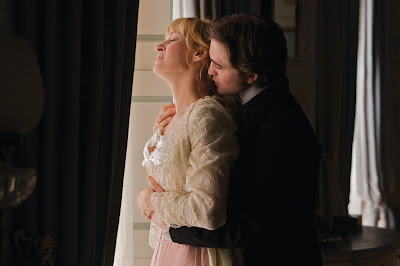 It's 1880 Paris and Rpatz is George Duroy, a returning soldier from the war. Down on his luck and living in abject poverty, Duroy has a chance meeting with fellow former soldier Charles Forestier (Glenister) while out on the town.

Feeling compassion toward his old compadre, Forestier gives Duroy a job as a journalist on the newspaper La Vie Francaise despite a lack of experience. However, with some tutoring from Forestier's wife (played by Uma Thurman), he's soon the toast of the newspaper.

But he also comes face to face with the realities of the corrupt Parisian high society to which he aspires: the sleazy colleagues, the wily financiers, and manipulative mistresses, and realising that there's a power game to be played here, he begins his own manipulations to ensure that he stays in the upper echelons of society, beginning an affair with Christina Ricci's Clotilde.

However, events begin to conspire against Duroy and soon he's left plotting revenge and vowing never to be caught in a world of poverty ever again...

Bel Ami is gorgeously shot but is tremendously pedestrian and shallow in places.

(Even if its release comes at a bitterly ironic time with Kristen Stewart cheating on Robert Pattinson and revealing she had been with director Rupert Sanders - some could see this film as a RPatz lovefest revenge piece...)

Pattinson fails to impress early on and through a combination of dead eyes, brooding eyebrows, sulky looks and moody silences, he tries to bring (and largely fails) some chemistry with the women on the Parisian front as he tries to manipulate his way through society. It's largely because the film feels so rushed you have trouble believing that the character of George Duroy could ascend so quickly. But if you're after a shirtless naked Robert Pattinson, baring his bum and giving it his all during sex scenes, then this film is for you...

It's a real shame because in the back end of the film, his character's anger, manipulation and desperation really are translated well by the actor - but you have to really bear with the film to get to that point and it's a hard slog to reach that dramatic conclusion. 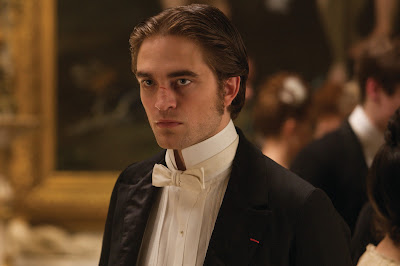 And in all honesty, I don't believe it's Pattinson's performance which is at fault - it's his directors who've not realised how wooden and detached his character's made to be.

It's a disappointment because Bel Ami has some very good scenes. But as it plays out over a short period of time in the film, the pace leads them to feel rushed; one scene where the editor of the newspaper, a minister and Duroy play cards brings everything a film like this should to the table - it offers an insight into the manipulative ways, seething jealousies and political games which are afoot.

Elsewhere in the cast, Thurman's impressive as a political puppeteer, Kristin Scott Thomas amuses as a lady who falls for Duroy's "charms" and Ricci still looks too young to be doing sex scenes. (Plus Ricci and Pattinson have a complete lack of chemistry throughout.)  They're a mix of women and portrayals in this film, and given that it's intimated that the women have all the power, I'm not entirely convinced by the acting of the main three.

All in all, Bel Ami is a muddled mess which borders on the dull in its first half and manages to up its game toward the end. It's no Dangerous Liaisons and lacks the edginess and danger of such a film - sadly,despite all his hollow eyed occasional seething mopiness, it's not entirely RPatz's fault - the directors have squandered their chance to make a Bel Ami which has sizzle, pearls of peril and threat as it tears its way through politics and Paris.