It's finally here - the ending of the epic Batman franchise from Christopher Nolan. 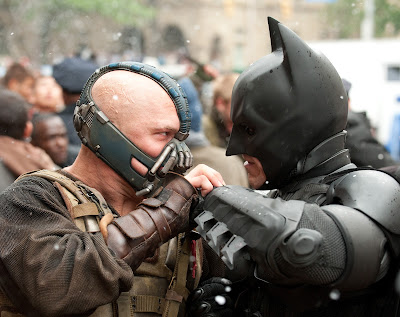 To say The Dark Knight Rises is one of the most anticipated films of the year is a massive understatement. Fans have been speculating over it, with slavish obsession and devouring every still released online.

So, does it provide a satisfactory conclusion to the franchise?

Eight years after the events of The Dark Knight and Batman's left Gotham after the death of D.A Harvey "Two Face" Dent. Hunted by the police and blamed for the golden boy's end, the Caped Crusader's become a myth and Bruce Wayne's not much better - a recluse living in Wayne Manor and never seen in public.

But when cat burglar Selina Kyle (Anne Hathaway) breaks into Wayne's safe and ends up on his radar and when a masked terrorist named Bane (Tom Hardy) threatens to take over the city, Bats has no choice but to come out of seclusion and save his beloved city.

There's more to the story but to be honest, revealing some of those intricacies, details and nuances of the script would veer into spoiler territory - and being frank, this Bat-threequel is best viewed unspoiled.

Christopher Nolan has crafted an epic ending to the series - and one which is reverential to the source mythology and one which has truly raised the bar for comic book films. It begins with an audacious piece of action and the thrills never let up until the end some 165 minutes later. Visually, the film offers so much, satiating both fanboys seeking the spine-tingling moments and the casual viewer wanting a great blockbuster.

While the film's somewhat disappointing denouement may not stand up to repeated inspection and tearing apart thanks to its conventional story which is spread over a somewhat bloated middle part, two things need to be remembered - one, it's a comic book film (which is bound to have a MacGuffin or two on hand) and two, it's the performances which anchor this film from beginning to end. 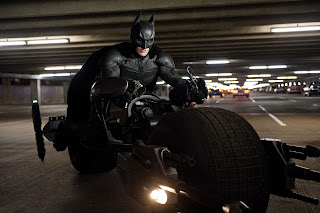 Christian Bale's vulnerable Batman is a flawed hero we can readily identify with; he's a tortured soul more than ever who's to be broken spiritually and physically by what's put in front of him; but Bale brings his A game to the performance, providing the emotional intensity during some quieter scenes needed to ground this film and bring a payoff which is rich and satisfying as he becomes the Batman who's an inspiration and a symbol to others. Likewise, when he's kicking ass as the Batman; this is a guy who's given a rounded and powerful performance to a character loved by many.

Gary Oldman's spot-on as a conflicted Commissioner Jim Gordon, a man who takes up the mantle of defending his beloved city; Morgan Freeman, is well, Morgan Freeman as Lucius Fox - and Sir Michael Caine is venerable, vulnerable and humane as butler Alfred.

Of the newcomers to the cast, Tom Hardy's anarchist Bane (who sounds a little like your English mate trying to do a Sean Connery style impression through a Darth Vader mask) is impressive; the ferociously intelligence and physical presence are astounding and instantaneous, giving his baddie a commanding feel which doesn't let up until the end (and if you know your Bat mythology, you'll realise how important it was to get Bane so right.) The scenes when Bats and Bane go mano a mano are intense, but not in the over the top way that you may have expected. And it's a performance which is a physical one too, with the eyes conveying a lot of his emotions - Hardy's to be commended.

Equally, Anne Hathaway is perfect as Catwoman (although she's never called such on screen); her Selina Kyle is a slinky, vampy, sly character which is given a few humorous lines to punch through the occasional pomposity which is prevalent. Marion Cotillard offers up some class as a member of the Wayne Enterprises board. 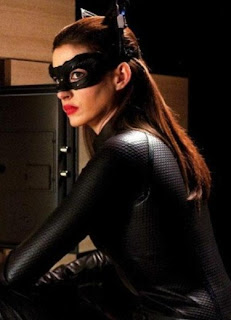 But the real star of the cast is Joseph Gordon-Levitt, whose idealistic and very human policeman John Blake becomes a driving force for belief. His Blake has the belief which has become so jaded and lacking in both Batman and Commissioner Gordon - and his character's story arc is thrilling to behold. Gordon-Levitt continues to impress as an actor and seals his place as one of the best talents on offer with this copper.

Visually, Nolan's utilised the best of the action he could muster, delivering up some flawless sequences which make maximum use of the IMAX format (and the playboy technology available) and offer some of the most impressive set pieces committed to celluloid.  In fact, overall, Nolan's provided a polished and tonally epic spectacle throughout; it's a film which talks of flawed heroes, of how the ordinary man can start a revolution and how belief can fuel hope - but it's not without a few flaws here and there (as well as some true comic book one-liners)

Sure, it's a fitting send off for the film and the franchise, and to concentrate on a few narrative misfires here and there seems a little unfair because overall, The Dark Knight Rises offers up much for the movie lover; this is a Batman movie which is a grand and satisfying end to an epic series; it's an unmissable event which lives upto its hype and offers a rich spectacle which the multiplexes will rightfully be packed out for.