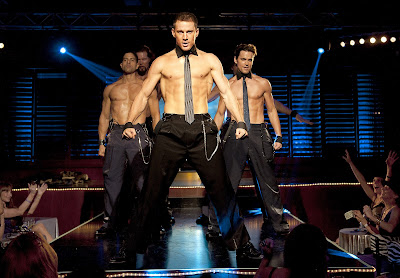 Yes, yes, as you can see, it's that film about the strippers.

But if you're expecting a full on raunchy night out with the ladies, you may be in for a little bit of a surprise.

And for the film lovers out there, a bit of a surprise from renowned director Steven Soderbergh - and yet again, another surprise from Channing Tatum.

Magic Mike is based on Tatum's experiences as a stripper - and follows his character, a guy called Mike, who's a self-professed businessman, entrepreneur and of course, dude throwing his robes off on stage and gyrating around for the cold, hard cash in the wilds of Tampa.

When he meets up with the Kid (Alex Pettyfer, looking a bit mopey, chiselled and scruffy) on a construction job, the two end up becoming friends and Mike introduces him to the world of stripping - a world which The Kid embraces whole heartedly being 19 and out for a good time.

But Mike does a little more than simply introducing him to the world - he takes him under his wing, and cares for him.

Inevitably though, the Kid's entry into this occasionally sleazy pasttime causes real problems for Mike...

Let's be clear about this, Magic Mike has scenes of Channing Tatum stripping (and others) and full routines that highlight the extreme pecs appeal of the rock hard abs of the cast which have been hired as the "Cock Rocking Kings of Tampa." And said scenes, and indeed routines, will cause many of the female audience to wilt, blush and generally whoop and holler at the screen. I will concede they're very well done, pandering to what an audience wants and are liberally used throughout. (Although I will confess I am deeply grateful that it's not in 3D)

And yet, this film is about more than the pelvic hip thrusts of the beefed-up man candy which are strutted during some mightily impressively choreographed dance scenes. 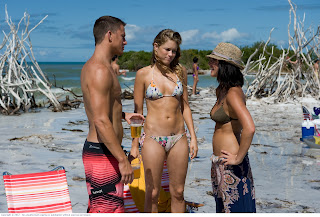 Soderbergh's pulled together a kind of cross between The Full Monty meets Boogie Nights which is more dramedy than drunken hens' night out antics.

Usually, these kind of hedonistic pieces would be filmed from the viewpoint of the newbie - but Soderbergh's flipped that, choosing to follow Mike, a genuinely nice guy who wants more to his life than his stripping (even though, based on his chiselled talents, that's clearly where the cash is) with businesses being run on the side and a desire to set up a custom-made furniture company. It's wise to have concentrated on Mike too, as the Kid's generally unlikeable and offers little to give you any real lasting connection throughout.

It's here that Tatum excels again, putting in an underplayed performance which channels sensitivity, charm and a bit of angst as Mike hits a very early mid-life crisis and begins to lose his way. Tatum's really impressed recently in a string of roles (21 Jump Street, The Vow) which have shown he's a little more than just a good lookin' guy. His Mike is occasionally mopey, lacking any real connections with anyone outside of his fake stripping world and give him a universal appeal to both women (who're lusting over him) and men, who've no doubt been dragged to the cinema with a nagging idea of what's ahead. Plus his fledging relationship with the admittedly rather bland sister of The Kid works thanks to his sparkiness and playfulness. 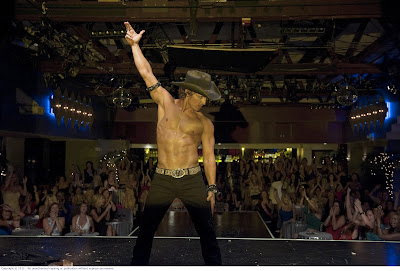 But I have to confess, in amongst the undeniable energy, the star of the piece is Matthew McConaughey's club owner Dallas, whose self parodying, lounge lizard is a blast to watch whenever he's on the screen (fully clothed or otherwise). McConaughey has a ball playing this and there are hints of rifts between Dallas and Mike, who's wanting a bigger stake in the club, which add an undercurrent of uncertainty to their relationship and a frisson to the dramedy that's unfolding.

All in all, Magic Mike is the perfect blend of angst and cheesy stripper moves (I never thought I'd be writing that) and is actually more of a downbeat low-key drama with heart (with a thoroughly predictable denouement) than you'd ever have expected from the posters and promos.