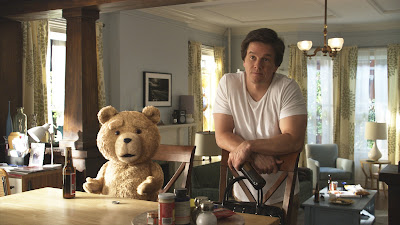 Wished that that childhood doll or toy would be with us forever and never leave our side.

Mark Wahlberg stars as John Bennett, who as a lonely little boy wished his Teddy (given to him by his parents at Christmas) would be his best friend forever and come to life.

Due to a Christmas miracle (and a falling star, of course) John's wish is granted and Ted springs to life, a fully sentient, walking talking teddy bear. Initially famous, Ted (MacFarlane) is the star of the world but years pass and it all changes.

John's now a thirty-five year old man, living in Boston who still rooms with his now pot smoking, hard drinking, sexed up teddy bear.  Except, John's not fully a) realised his potential or b) lost the plot. Stuck in a dead end job, he's been dating the beautiful Lori (Kunis) for four years.

But Lori's looking for the next level of commitment - and one evening, after the pair return home from an anniversary dinner, they discover Ted's gone too far and Lori decides he needs to move out.

So, Ted and John's friendship which has endured over centuries is facing the biggest test of all - will John finally grow up and ditch the Teddy forever, despite having promised to be BFFs? 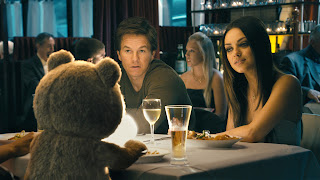 Watch an exclusive behind the scenes TED featurette. (NSFW)

This vulgar, R-rated comedy about a hedonistic bear and his unable to grow up owner from the creator of the consistently offensive Family Guy has been a massive hit in the States already - and it's easy to see why.

It's a boundary-pushing, potty-mouthed treat which you know you shouldn't laugh at because of its shock factor, but you just can't help yourself.

It's got MacFarlane's paw marks all over it; without a doubt, his trademark offensive, pop culture referencing , shock tactic humour is there right from the beginning. And by goodness, it's certainly unexpectedly and consistently funny throughout its running time despite the story of romance vs bromance which we've all seen before on the big screen. 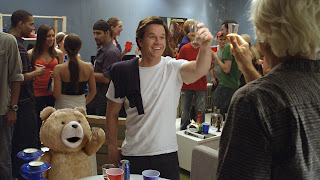 The key to the success of this is a wickedly funny script and some great performances from Wahlberg, as the Bostonian man-child who can't resist the call of his furry friend and Kunis, who makes her long suffering girlfriend feel real rather than a one note bitchy character who simply wants her boyfriend's best friend out of the equation. Put in some hilarious cameos, some self referencing moments and you've got the recipe for one of the most unexpected hits of the year.

That's the thing with Ted - in amongst the shock factor, cartoony feel and Family Guy style random digressions, there's actually a great deal of heart in this story, which is swathed in whimsy and 80s nostalgia (You'll leave the cinema humming the Flash Gordon soundtrack).

MacFarlane's pulled together a story which works for the most part (a digressionary piece about Ted being kidnapped by a creepy stalker doesn't quite hit the mark) and a cast which gel well thanks to their realism.

Throw in a great performance from himself as the caustic, sarcastic and acerbic bear as well as some cool CGI as Ted the bear, and this film is one which will leave you in fits of laughter, frequent moments of appalled and with a warm and fuzzy - but slightly guilty - glow as you leave.