Actually, in all honesty, I've lost track of whether it is Day Five of the reviews, due to the level of choice I'm being spoilt with...

But, if you are scanning ahead for films to watch, check out the following links: 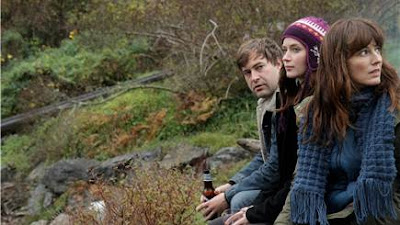 Your Sister's Sister - Emily Blunt, Mark Duplass and Rosemarie DeWitt star in this threesome which is probably one of the most charming films I've seen so far at NZFF 2012. From Humpday director Lynn Shelton, comes this tale of the trio and whose lives are changed by a trip. Duplass stars as Jack, whose brother Tom died 1 year ago; Jack's struggling to cope so his best friend Iris (the ever luminous Blunt) sends him off to a family cabin to get some headspace time and to hopefully, change his outlook on life. But when he arrives there, he finds Iris's gay sister Hannah (DeWitt) there nursing a break up. One bottle of tequila and a drunken fumble later finds the duo in all manner of problems. Particularly when Iris shows up unannounced... Jack's plan? To keep the truth from Iris and just get through the next few days. However, both Iris and Hannah have designs on Jack which he could never have expected. Deftly funny, smartly written and with a cast that underplays each line and scene so beautifully, Your Sister's Sister is a gently amusing, utterly engaging and totally enjoyable visit to the festival.Clever writing which feels real is Shelton's trade in this - and when matched up with the rising brilliance of a deadpan and yet farcical Duplass (who you really should see in Safety Not Guaranteed when it shows up), it's a winning combination. Even when things take a turn for the apparently more serious, Your Sister's Sister never loses the plot - or the audience. This goofily charming movie is an acutely observed three hander which is poignant when it needs to be and totally winning from beginning to end.

The Hunt - I'd heard dark things about The Hunt from others who'd attended this - about how it got unrelentingly bleak and so to be honest, I had been expecting the worst from this tale of kindergarten teacher Lucas ( an award winning Mads Mikkelsen) whose life is irrevocably changed after one of the children in his charge lies and falsely tells his boss he's been sexually abusing them. 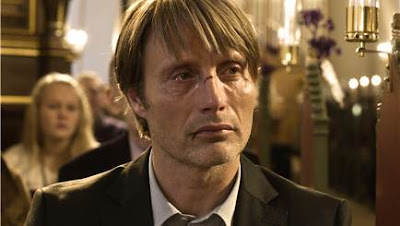 What I couldn't have been expecting is just how utterly compelling and totally claustrophobic, this latest film from the director of Festen, Thomas Vinterberg was going to be. It's actually one of the films of the festival so far as far as I'm concerned. It's no wonder Mikkelsen won the Best actor at Cannes this year for his portrayal of Lucas, the innocent man who's damned before his peers without any shred of evidence.

But what's winning about this film is how utterly plausible it is and how non-hysterically it plays out. Mikkelsen and youngster Annika Wedderkopp (who plays Klara who makes the claim) are completely the stars of the piece thanks to underplayed, subtly sly and riveting performances. Sure, it's an old story and one which we've all seen shades of before, but it's these two actors who imbue their time on screen with such utter devotion that you can't help but be swept up by it.
Vinterberg also needs commendation for his directing and crafting of the tale - Lucas goes from being part of a gang of friends whose bond stretches years back to a haunted and vilified ghost of a man, whose (admittedly frustrating) refusal to totally refute the claims seems like madness. No doubt his self belief is what carries him through but as they say, it's darkest before the dawn, and Mikkelsen's subtle performance is a cinematic tour de force.
Similarly, Wedderkopp, a cute blond moppet (a direct contrast to Mikkelsen's frog like facials) plays a girl who doesn't understand the truth of her lie and who's caught up in a world she can't possibly understand. The scenes where she tells her mother that it didn't happen and her mother comes back telling her it did are gobsmackingly heart breaking and cut an emotional quick as well as hint at a reality of what could play out. Vinterberg's hit a fine form here and a few nerves as well (judging by the horrified yelp of one woman at the screening's ending last night) and makes The Hunt as dark as anything you're likely to experience during the festival. ,
The Hunt is horrifyingly good heart in the mouth drama that challenges but showcases acting genius and really does need to be seen up on the big screen while you have the chance.

Take a look at a clip from The Hunt below.

And also, if you fancy previewing any of the films on at the New Zealand International Film Festival, here's the festival's official Youtube channel for you to peruse at your leisure.