The very latest reviews from the New Zealand International Film Festival as it continues in Auckland. As the first week continues and the plethora of choices multiply, I'm getting a bit of onside help from Akl writer Jacob Powell to help cover as many films as we can between us. 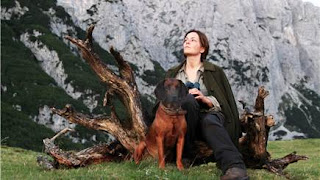 The Wall
The Lives of Others' Martina Gedeck stars as an unnamed woman in this slightly bizarre, left of centre, day after tomorrow feeling psychological piece. After being dropped off at a cabin, the woman (who's never given a name or background throughout the film) sets about her day-to-day existence with only Lynx, a dog left behind by the previous owners. One day, when heading out for a walk, she bumps into an invisible forcefield, separating her from the world beyond. Obviously shocked and with no clues as to what's happened, the woman retreats to the safety of her cabin and regroups - but heading out again, she finds the wall still there and the few people she can see beyond are frozen and unmoving. But she gradually discovers she's not alone with animals ending up in her care and near her home to provide her with what she needs. However, her reality is jolted when she hits a crisis point... Sparse, sombre and a tour de force one woman feminist performance, Die Wand, is a surprising piece of cinema which uses sound, its fantastic valley surroundings to maximum effect. Some images are stark, haunting and frightening - and a lack of real resolution or reason as to what's unfolded leads your mind to wild conclusions and expectations.  Gedeck is nothing less than compelling throughout in this piece which is adapted from a book and is told via flashbacks. But the tonal shift when events change dramatically at the end, seems to sit at odds with what's already unspooled in front of you and prove more baffling and frustrating after investing some two hours in this intelligently put-together feminist existence. Die Wand is a challenging piece of cinema, destined to provoke questions and discussion which makes it the perfect fodder for the New Zealand International Film Festival. 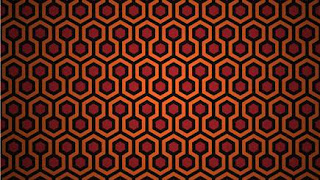 Probably one for the film nerds, conspiracy theorists, and sociologists - but ZOMG, WHAT a film!? Rodney Ascher's Room 237: Being an Inquiry into The Shining in 9 Parts is an exquisitely fascinating documentary of five persons' close reading of Kubrick's 1980 adaptation of 1977 Stephen King novel The Shining that spirals down the wormhole of neurosis and beyond, appearing once again on the other side. Fact meets fiction as the full gamut of possible and impossible theories is expounded with regards to Kubrick's genius as applied to this piece of cinema; just as you find yourself attesting to the plausibility of someone's point of view they stretch your credibility to breaking again. Wonderful stuff that, in terms of type and level of appeal, I would sit alongside the equally compelling Z Channel: A Magnificent Obsession which played NZFF 2005. Room 237 is shaping up to be one of my picks of the NZFF 2012. (Guest reviewer - Jacob Powell) 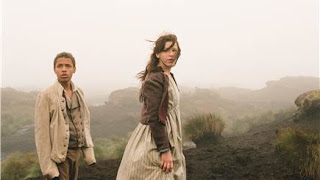 Social realism in the North Yorkshire moors! For her 3rd feature rising British auteur Andrea Arnold turns her hand to adapting Emily Bronte's much revered 1847 classic Wuthering Heights and does so with a strong directorial vision. Arnold's film is firmly clothed in its Northern setting capturing the grim, forbidding environs in which Cathy & Heathcliff's young love blossoms in crisp detail, extracting the raw beauty behind the ever present wind. It is fair to say that the viscera of everyday country living gets more attention from the film than does its limited dialogue. Similarly Arnold dials back the use of music preferring ambient sounds from within the scene. The obsessive, single-minded focus on the world the characters inhabit reflects the nature of the intense bond between the two protagonists; finding a sense of home in the spare, cold crags and moors mirrors the tenor of the relationship they grow into. Arnold delivers classic romantic drama as a work of cinematic art. (Guest reviewer - Jacob Powell)