Packing in the discomfort over a slow boil proves to be reasonably effective for this German take on a family reunion.

German director Peter Hengl provides a simmering discord between obese teen Simi (Nina Katlein) and her cookbook-writing aunt Claudia (Pia Hierzegger) as she visits ahead of an Easter weekend. 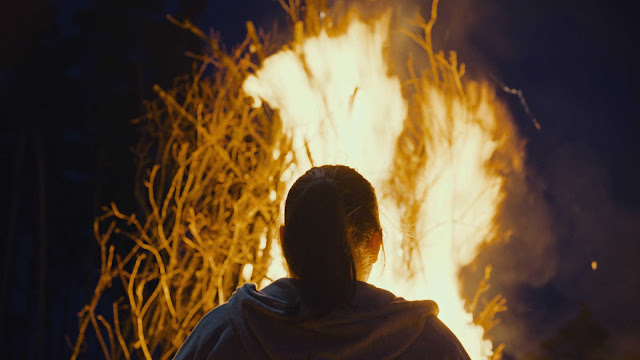 Despite Simi's mum warning her that published author Claudia is a "bit esoteric", Simi is troubled by the dynamics at play, and the conflict between herself and her cousin Filipp, who's both withdrawn and sullen, yet angry at Simi's arrival.

When Simi approaches her aunt to help her lose some weight, a chain of events is set in motion...

Family Dinner is not a film that's in any rush to get to its destination.

By providing a slow-burn, Hengl manages to ratchet up the discomfort throughout the build up to the Easter weekend events, and also manages to cook up the awkwardness throughout.

While the material at times feels a little thin, it's in the smaller moments and interactions that Hengl's more interested in angling the film. From side looks to a relatively emotionless lead whose bewilderment becomes more obvious, the film's strength is in the subtleties, not the showiness.

Connoisseurs of folk-horror may harbour an inkling of where this is going, and the appearance of a bonfire pile in the middle of a field may ring some bells, but Hengl's movie isn't interested in ploughing through familiar territory, preferring instead to go its own path.

It's in the relationships that this frosty film is interested, and while it may take a while to inveigle its way under your skin, and leave you feeling the denouement lacks a little lasting power, it's cinema of unease in extremis.