Stephen Karam's adaptation of his one-set play is blessed with a stellar cast.
From the always watchable Richard Jenkins to Beanie Feldstein, this story of a family brought together for a Thanksgiving meal inside a rundown lower Manhattan apartment is more pertinent for what's not said than what is spoken across the table and in the build up to the meal. 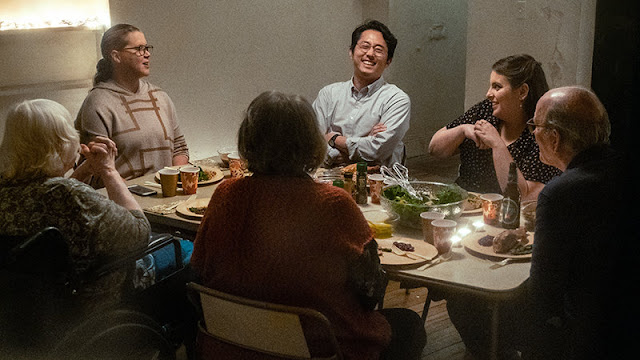 Thanksgiving meal stories are always of a similar ilk - an outpouring of tensions before an explosion and catharsis toward the end of the meal as the true evocation of Thanksgiving is invoked.
In many ways, Karam's story doesn't veer drastically away from the tropes and template of what's expected, but using a combination of some claustrophobically shot angles and some creepily timed noises, The Humans feels like it's aiming for a ghost story that never fully delivers.
Described as a take on existential dread, Karam's technically-adept film feels at once light on drama and yet confined by its stage limitations. But as the rhythms of the story begin to take hold and Jenkins' demons begin to manifest themselves as well as the tension between Feldstein and Amy Schumer's sisters, there's a veracity that proves hard to shake.
From close ups and a nervy soundtrack, there's a feeling that The Humans is heading for its pot-boiling-over-moment from its very first 10 minutes. It's fair to say the bubbling up moment isn't as dramatic as one would have been expecting, but thanks to the stellar work of its impressive ensemble, the journey to the end is just about worth clinging on for.
By Darren - August 04, 2022

Email ThisBlogThis!Share to TwitterShare to FacebookShare to Pinterest
Labels: The Humans: NZIFF Review