Billed as a "response", not a recreation of raids on the Tūhoe tribe through the years, director Tearepa Kahi's charged journey into the action of October 2007 is as volatile a powderkeg as ever you're going to see.

Centring on Cliff Curtis' Community support police officer Sergeant ‘Taffy’ Tawharau, the film builds up a picture of a community under the watchful eye of its masters, and also in the sights of a government determined to take out its leader Tame Iti and his disciples in the wake of seditious comments. 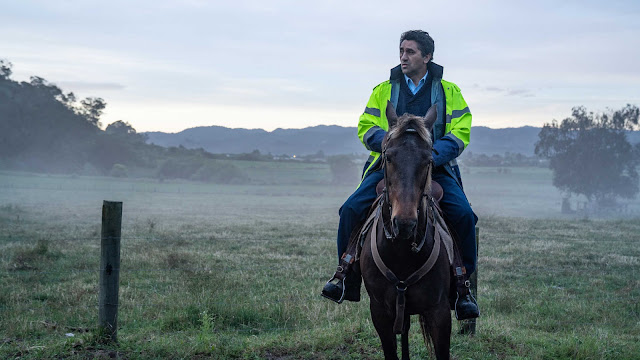 Against a backdrop of anti-terrorism laws, some political climbing and career opportunities within the police's armed teams and a frustration that outside forces don't understand the internal politics and human faces of the region, Taffy finds himself caught squarely in the middle of what will turn out to be an extraordinarily bad day.

From driving around his community in a bus, transporting school kids and aunties to health appointments, as well as trying to deal with a loose cannon in the community, Taffy has it all to juggle - and Curtis delivers it all with superior aplomb.

Seizing in on the humanity of the situation, Kahi builds a house of volatility, fuelling the fire, but never over-milking it for effect. Expanding the scale of his filmmaking, Kahi moves into action movie territory in parts, with a soundtrack building to an explosive conclusion. But just as the audience believes the film will go one way, a simple holding back of the tension proves to be devastating.

It's not all perfect.

There's clearly not room for nuance in the Government side here - and Kahi isn't really interested in ensuring a fairness from those in power. After all, the film is a response, not a measured expose of what happened - but by balancing this with the humanity of all those caught in the day and led by Curtis' Taffy, the imbalance is just about rectified.

Unfortunately, Manu Bennett is the weak link here, his character clearly seeming to think the brief is like something from an 80s revenge movie, and the lack of subtlety and almost OTT edges to the acting make him stand out like a sore thumb from the quieter more refined tones of Curtis, Simone Kessell et al.

Using children as a foil for the humour in the horror proves to be the relief that's needed, but it's in Muru's compassion that the film gains its strengths.

From a confrontational start to an emotionally devastating end, Muru has a rollercoaster of a journey to endure - and audiences will perhaps be surprised how much they're swept up in it, no matter what politics or affiliations they may hold.