Taking the Predator franchise back to its very basics proves to be potent for Dan Trachtenberg's Prey.

Set in 1719, it's the coming-of-age tale of Naru (The Ice Road's Midthunder) a highly skilled warrior in the Comanche Nation, struggling to break through the patriarchy of her tribe. Desperate to undergo a hunting trial to prove her worth, and possibly to lead her tribe, Naru is thrust into a deadly game of hide and seek with the Predator. 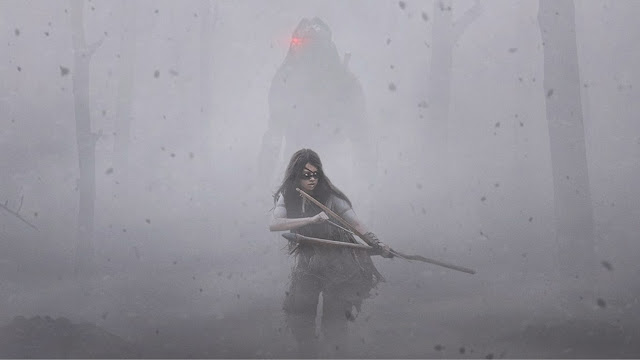 There's scant little story in this 90 minute revisioning of the Predator franchise, a series that's become mired in average entrants and sidelining its basic premise - a hunter and its prey locked in a high stakes survival tale.

But Trachtenberg has a good fist on knowing what the audience wants in this latest, and delivers in force.

Spending a third of the film building up to the eventual meeting of Naru and the Predator, Prey's interested in examining (but not developing) the dynamics of a tribe and the aspirations of its Horizon Zero Dawn-esque Naru.

Throw in a wounded member of the tribe that needs to be returned home and a group of victims who are more interested in mocking Naru than listening, and you have many of the classic tropes of a horror movie as the clueless are picked off one by one.

Despite one dodgy FX sequence involving a bear and the Predatory, a lot of what emerges from Prey is tense fare that immerses the audience in the simplicity of its premise. (Despite the fact 20th Century has committed this to streaming rather than a big screen outing).

Midthunder, channeling both Orphan Black and Aubrey Plaza is a commanding presence that resonates strength and stoic nature - but the message of empowerment is possibly what's worth taking away here. She is a character who early on is dismissed by the Predator as not worthy, but who emerges easily from her own shadow.

While there are some impressive kill scenes (an early scene of a snake being stripped of its spine to name but one), the film doesn't overdo things, and Trachtenberg knows that less is more. While the aforementioned bear scene is a blunder, the MO of this film is to make the Predator both cool and scary again. One could argue that by setting a Predator film within a jungle setting is awfully familiar, it's Prey's intention to honour and continue that tradition rather than simply ripping it off.

Prey is a knock-it-out-of-the-park return to form for the franchise. It proves that there's still a market for simple concept films, well executed under a 90 minute banner and shows that with the right mix of a strong lead and a grasp of the confines of the genre, greatness can emerge.

Even though it's been confined to small screen, this is one Prey that's worthy of being hunted down.