Tell us about your 2022 Film festival film 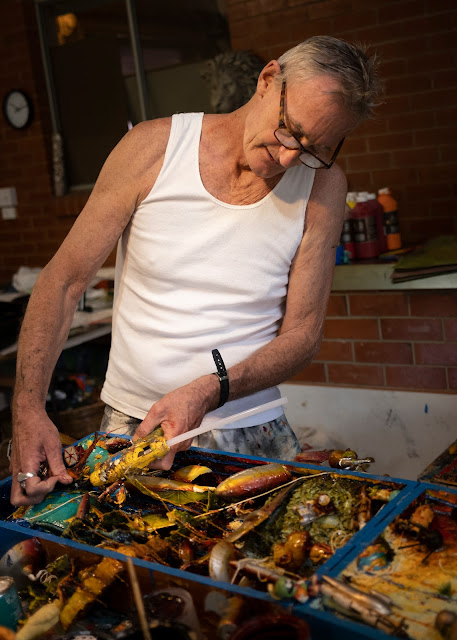 GG -         Geoff Dixon | Portraits of Us is a feature length documentary on the life and work of New Zealand born artist and surreal conservationist Geoff Dixon.

The film explores the many layers of the artist’s life in his own words, from his studio in Cairns and his local environment: the peaceful sanctuary of his own garden and the awe-inspiring beauty of the rainforest and Australian and New Zealand landscapes.  Geoff has long been concerned with the fragility of the natural world, rubbing up against the human drive for collection and preservation.

What inspired you to make this film?

GG -    Glenis is a passionate advocate of Geoff’s work, and it was proposed to her that someone wanted to  support a film about him.  She had a job at the time and suggested a couple of other people who might like to make it.  Nothing happened, and after she was made Covid redundant she decided, with the promise of private funding, it would be a great to opportunity to direct a documentary on Geoff.    She didn’t think she could tackle it alone and sold the exciting concept to Clare by introducing her to his work – deal done!

We had worked together on several art docos through the early 2000.  We met working on Bread and Roses back in 1992/3.  But both of us gave up film and left the industry due to lack of finance!

I’d been working for over 20 years as a production manager and producer.

Clare: I have always worked across media and health (initially training as a nurse) and at times have had to forsake one for the other depending on funding or new professional challenges I wanted to do. One of those was establishing NZONSCREEN as the first Content Director – it was a great project by NZONAIR and glad to see it is still going strong. Others have been in health, hospice education and digital media and strategy.

(GG)   The inspiration came with a new found freedom of being able to develop and produce a privately funded doco with no strings attached (we thought).  It also gave me the opportunity to direct, something I’d only watched others do!  We revamped our production company, gogo media AOTEAROA and began research on the project.

The hardest thing was trying to raise production funding.  A full budget was delivered to our investment angel but he was taken aback with the true cost of film!  We received an initial payment of $15,000.

We were turned down by CNZ but with our initial deposit we just decided to go ahead.  Penney Moir from Bowen Galleries was a terrific support and taking on the role of EP, she ploughed ahead and  went into fundraising mode.

We managed to pay the crew over the production with strong support and discounted rates from colleagues. Clare works 3.5 days a week at Mary Potter Hospice whereas I only coped because I’m  a gold card holder!!

How has your filmmaking changed during these Covid-19 times?

(GG) We started research and planning back in August 2020 – so what Covid did was make us re think our whole approach to the project.  We knew we couldn’t travel to Cairns but Geoff connected us to Dr Russell Milledge, his friend and experimental filmmaker, who was a professor of film at James Cook University in Cairns.

We talked and discussed options for his end – we planned the Wellington shoot, how we thought the film would work, who/what we needed in New Zealand with the aim to follow Geoff working toward a exhibition in May 2021 at Bowen Galleries here in Wellington.

Zoom became the big directorial link between Wellington and Cairns – we’d set up meetings, and interviews, what we wanted, what was possible……then we did the same thing with Euan Macleod’s interview in Sydney with a different crew. I called a dear friend and colleague from TVNZ days and asked her to if she could find us a crew in Sydney.

(Clare) Bringing Amanda Mulderry on board as editor really brought the film together – she’s a fantastic person to work alongside and has her own creative vision which she brings to the table.

What’s the moment you want your audience to remember most from your film?

Glenis: If I’m allowed two – one is the Sentinel exhibition showing his wonderful large paintings of birds and the other is the end interview, where Geoff says he is back working and inspired to continue.

Clare: Yes! Geoff’s dedication to ‘keep doing the work’ (the environmental and political work as well as the aesthetic creative work) and the fact that these beautiful paintings sometimes take a whole year to complete! When you think about his whole body of work – that is a huge commitment!

The other thing is the importance of good friends and how they sustain us through the good and bad times. ☺

Aside from your own, what’s the one film that you reckon everyone should see at the festival?

What’s the last film you saw and how was it?

Clare: Whina – our history in Aotearoa – so much more to be told. Whina is a beautifully crafted slice of history of a wonderful political and staunch Māori woman leader – a little romanticised perhaps but that’s also it’s magic. For the full story, read the biography, Whina by Michael King.

I was surprised how much I enjoyed it.  I’m a big Elvis fan and wasn’t going, but my son suggested Austin Butler was pretty good!  (I’d seen Whina much earlier)

What’s the film you wished you’d made, and why?

Glenis-  Nomandland – Written and directed by Chloé Zhao .    The film portrayed a particular lifestyle, not of someone’s first choice,  in such an effortless and natural way, making true to life drama – fantastic cast and real characters playing themselves.