There are a lot of cliched ways to present volcanoes on screen.

Disaster movies make great fist of their explosive power, sending out rumbling waves of destruction destined to wipe out many; and documentaries slow down exploding lava shots as they shoot high in the sky.

So you'd be certainly right to feel that a documentary about a pair of volcanologists probably couldn't really offer anything new to the genre. 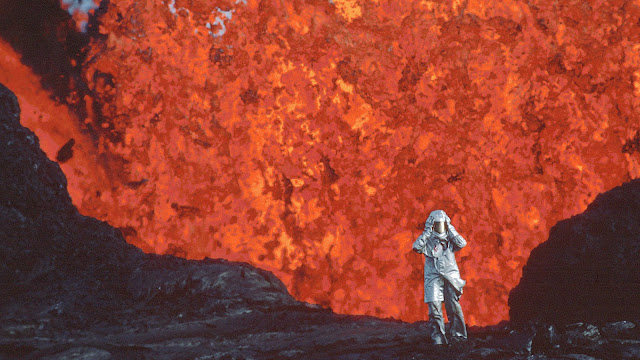 Fire of Love, directed by Sara Dosa, concerns itself with a pair of French volcanologists who met, fell in love and chased volcanos together - and it's mesmerising stuff.

Thanks largely to a swoon-worthy French OST and obligatory shots of explosions, Dosa threads together a narrative about Maurice and Katia Krafft that shows how their love grew through their work. It may be tinged with tragedy (as they died while exploring a volcano that had erupted) but there's nothing morose or mordant about Fire of Love.

With sequences of volcanos that show rocks falling from the skies while a pair of silver-suited explorers look on, the film crafts something that's utterly compelling and cinematically thrilling. It may be the duo look like some kind of extras from a bad BBC 1970s sci fi drama, but Dosa gets under their skin (and suits) by using their original footage and thoughts on volcanos.

Initially only interested in red volcanoes (the ones whose lava flows and bubbles), the film demonstrates how their interests shifted more into exploring "grey" volcanoes, the more deadly and volatile magma beasts, which would ultimately tragically consume them.

But what Dosa does is to tell a story that celebrates their life, praises their work and elevates the duo into people you desperately want to know more about. With humble footage carefully constructed and elegaically presented, Fire of Love is an unmissably original experience that manages to be spectacularly moving.