You Won't Be Alone: NZIFF Review

You Won't Be Alone: NZIFF Review

Don't be fooled by You Won't Be Alone's pitch of a shapeshifting witch.

Goran Stolevski's almost meditative take on what eternal life means is actually a thought-provoking piece that some are comparing to Terrence Malick's Tree of Life.

Set in Macedonia in the 19th century, it follows a witch who uses her one "witching spit" on a baby that grows up within a community and takes on various lives when it realises how it can become others. What follows is less a horror slasher of someone stalking a village, but a meditation on what life can be like for others, what aspirations there are, and where the journey can take you. 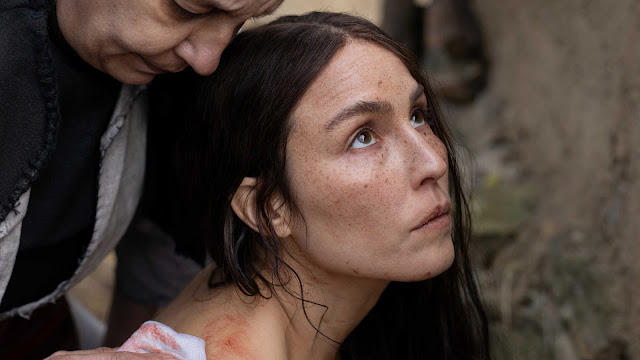 There's no lying that this is slow cinema in extremis, and with a near mute protagonist there are moments that it feels like an artsy-Witch infused version of Nell, but with a lyrical bent and a determination to get to its end, Stolevski's You Won't Be Alone does feel like the payoff is worth it.

In the latter third of the film, there's much to be said about toxic male behaviours, and an idea that manhood is something to be aimed for in life's progression is perhaps the wrong message to take from it all, but it's an inescapable feeling that rises from the film as it plays out.

But equally this section offers fascinating insights into society's expectations for women, gender expectations and the parenting role.

There are moments of brutality within, but there are never moments of deliberate exploitation, thanks to the alluring nature of the story and how its rhythms can wash over you.

Questions of language, civilisation and growth all come to the fore as this season of the witch plays out. You'll be surprised by how its lyrical qualities leave many seeds implanted in you long after it's done. A compelling debut for sure, and a refreshingly different and engaging take on what it takes to be a witch.

Email ThisBlogThis!Share to TwitterShare to FacebookShare to Pinterest
Labels: You Won't Be Alone: NZIFF Review